The stars are right again, and what an age-old cult had failed to do, a band of innocent authors has accomplished. After vigintillions of years the Flash Fiction Contest is loose again, and ravening for delight. Each week, batches of stories will be released into gladiatorial pits to fight for supremacy. The floor will be churned to mud with the blood of the fallen until the mightiest stories remain for your delight and dread. Head over to the forums, take up your stone, and join us in the harvest festivals of the October Country.

It’s easy to be become a member. Sign up for a forum account and make a single post so we know you’re not a bot. This is a good thread to start with. From there, head over to “The Arcade” as the contest thread will not be visible until after you have made at least one post. Authors, encourage friends and families to come over and participate – you just can’t tell them which stories are yours. Visit our forums for rules and details. 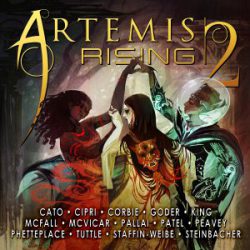 During the month of September, PseudoPod seeks submissions to celebrate ARTEMIS RISING, a special month-long event across the Escape Artists podcasts featuring stories by women and nonbinary authors in genre fiction.

The original paraphernalia for the Flash Fiction Contest had been lost long ago, and the black box now resting on the stool had been put into use even before Old Man Stuart, the oldest man in town, was born. Mr. Lieberman spoke frequently to the forum members about making a new box, but no one liked to upset even as much tradition as was represented by the black box. There was a story that the present box had been made with some pieces of the box that had preceded it, the one that had been constructed when the first people settled down to make a village here.

Mr. Garrett and his oldest daughter, Victoria, hold the black box securely on the stool until Mr. Lieberman can stir the papers thoroughly with his hand. Because so much of the ritual had been forgotten or discarded, Mr. Lieberman had been successful in having slips of paper substituted for the chips of wood that had been used for generations. Chips of wood, Mr. Lieberman had argued, had been all very well when the village was tiny, but now that the population was more than three hundred and likely to keep on growing, it was necessary to use something that would fit more easily into the black box.

END_OF_DOCUMENT_TOKEN_TO_BE_REPLACED

Across the globe, the dreams of the artists are causing many a restless and feverish night. Someday soon the call would come, when the stars were ready. The time would be easy to know, for then mankind would have become as the Flash Fiction Contest; free and wild and beyond good and evil, with laws and morals thrown aside and all men shouting and killing and revelling in joy. Then the liberated Flash Fiction Contest would teach them new ways to shout and kill and revel and enjoy themselves, and all the earth would flame with a holocaust of ecstasy and freedom.

A special Flash Fiction contest portal will open on Submittable at midnight EDT on 8/15 and close at midnight on 9/15. If the portal disappears, submissions are formally closed and will not reopen.

In order to be a valid submission to the contest, each story must adhere to the following rules: END_OF_DOCUMENT_TOKEN_TO_BE_REPLACED