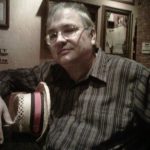 Shawn M. Garrett is the co-editor of PSEUDOPOD and either the dumbest smart man or the smartest dumb man you ever met. Thanks to a youth spent in the company of Richard Matheson, Vincent Price, Carl Kolchak & Jupiter Jones, he has pursued a life-long interest in the thrilling, the horrific and the mysterious – be it in print, film, art or audio. He has worked as a sewerage groundskeeper, audio transcription editor, pornography enabler, insurance letter writer – he was once paid by Marvel Comics to pastiche the voice of Stan Lee in promotional materials and he spends his days converting old pulp fiction into digital form for minimal pay. He now lives near the ocean in a small metal box and he hopes that becoming a Yuggothian brain-in-a-jar is a viable future, as there is NO WAY he will ever read all the books he has on his lists, or listen to all the music he wants to hear. Everything that he is he owes to his late sister Susan, a shining star in the pre-internet world of fan-fiction, who left this world unexpectedly in 2010. Shawn was brought on as an Associate Editor in 2008, and he became Editor in 2011. 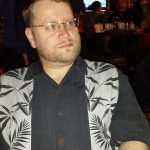 Alex Hofelich is Co-Editor of Pseudopod and pictured here at Trader Vic’s Atlanta. You can find him at tiki bars, local bookstores, microbreweries, and family-owned eateries. Like most tigers, Alex is made up of dragonflies and katydids, but mostly chewed-up little kids. Alex started assisting PseudoPod in 2009, and was brought on as an Associate Editor in 2011. He became Assistant Editor in 2013, and joined Shawn Garrett as co-Editor in 2015. 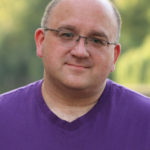 He co-owns the Escape Artists Podcast Network and hosts their horror podcast, PseudoPod, along with the Hugo Award nominated science fiction podcast, Escape Pod. He is a frequent guest and presenter on podcasts, with voice acting credits including the 2019 AudioVerse Award-winning The Magnus Archives.

A frequent awards judge including the Arthur C. Clarke, The Kitschies, Brave New Words and the BFS, he blogs at www.alasdairstuart.com and is on Twitter @AlasdairStuart.

Alasdair joined the PseudoPod team as host of episode 048 in 2007. 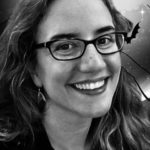 Karen Bovenmyer earned an MFA in Creative Writing: Popular Fiction from the University of Southern Maine. She teaches and mentors students at Iowa State University and Western Technical College. She is the 2016 recipient of the Horror Writers Association Mary Wollstonecraft Shelley Scholarship. Her poems, short stories and novellas appear in more than 40 publications and her first novel, SWIFT FOR THE SUN, debuted from Dreamspinner Press March 27, 2017.  Karen’s website is at http://karenbovenmyer.com/.

Karen joined the PseudoPod team as assistant editor in 2018. 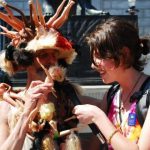 Chelsea Davis is an Audio Producer for Pseudopod. She is a freelance writer and radio producer with an interest in all things weird, and has published stories on topics from cosmetic surgery to zombie musicals. You can fill your eye-holes and your ear-holes with her work by visiting her website, https://chelseamdavis.net, and can subscribe to her monthly newsletter about horror and comedy film at Shrieks and Howls. When Chelsea isn’t busy making stories, she studies them as a PhD candidate in English literature at Stanford University. Her research focuses on horror and the Gothic–meaning she gets to read, write about, and teach creeptastic stuff all the livelong day. Chelsea joined the PseudoPod team as an Associate Editor in 2015 and an Audio Producer in 2016. 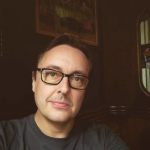 Marty Perrett has dabbled in the podcasting/narrating/production world for around 10 years now and likes to fumble his way around manipulating audio for best results. An office manager by day, he lives with his partner and their ridiculous cat in London. His local pub knows him by name and starts pouring his drink before he’s even stepped in the door.

Marty is also perpetually in the middle of writing a four-part comedy sci-fi novella series called Space Danger, under the name Doug Strider. His belief is that if one day he should finish it then all other prophecies will come to pass (in time for tea, it is believed). So it’s like a huge responsibility. Marty joined the team in 2017. 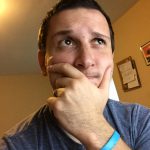 Brian Lieberman is the PseudoPod Community Manager and erstwhile associate editor. By day, he’s practicing the ancient art of development at a small marketing agency. By night, he parties up with his friends to slay demons and other baddies. He lives in Columbia, Maryland with his wife and a pair of adorable rats. Brian joined the PseudoPod team as Community Manager in 2007 and was an Associate Editor from 2012 to 2019. 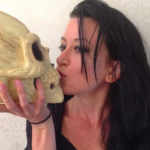 Carson Beker/ Ash (they/them) is a hybrid storyteller, experience creator, and ghost cat fighting the apocalypse, co-founder of The Escapery Pirate Art Collective and Queer Cat Productions Theater Company. Their stories are upcoming or found in Joyland, Fairy Tale Review, Spunk, Foglifter, Gigantic Sequins, and on ships and in cemeteries and on stages. They are proud to be a Lambda writer and graduate of Clarion West 2018. They can be found at CarsonBeker.com; QueerCatProductions.com, at Escapery.org. They are most definitely haunted. They joined the team in 2019. 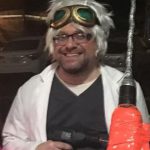 Scott Campbell searches for battles that will increase his skills for the battles to come.  The slush pile underneath Pseudopod Towers is a worthy opponent.  He also writes, directs, and performs for the queer (in every sense of the word) cabaret The Mickee Faust Club.  He also write far too infrequently at the official online home of the Sleep Deprivation Institute (and pop culture website) Needcoffee.com.  He lives in Florida with absolutely no pets. Scott joined the team in 2016. 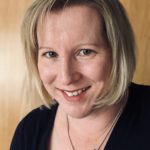 Kat Day is a writer and chemist who’s had both fiction and non-fiction published in various places. You can follow her on Twitter @chronicleflask. She lives with her husband, two children and cat in Oxfordshire, England. She thinks black coffee is far superior to tea. The purple liquid on the stovetop is none of your concern.  Kat joined the team in 2019. 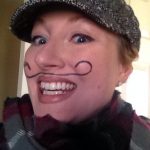 Cecilia Dockins resides near Nashville, Tennessee. Over the years, she has slung cocktails in bars, instruments in surgical suites, ink on paper, and possibly a curse word or two. She’s an Odyssey Writing Workshop graduate and former University of Maine: Stonecoast student, a failed academic, loner, dreamer, damn-good angler, and professional book hoarder. Cecilia joined the team as an Associate Editor in 2017, and served as one of the guest editors for Artemis Rising 6 for March 2019. 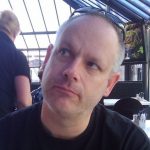 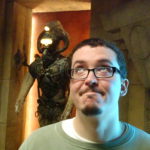 Jamie is a writer, editor, document designer, occasional English professor, and full-time curmudgeon. He holds a MA in Professional Writing from Kennesaw State University, where he also wrangles cats and occasionally provides information systems support. He lives with his far superior wife, his indefatigable kid, and the platonic ideal of dog.  Jamie joined the team in 2020. 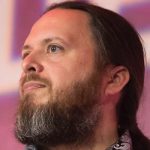 Adrian Howard helps teams get better at delivering software products for a living. People don’t pay him to write bad fiction or run silly interactive micro-fiction experiments (but he does it anyway). Adrian spends his day vacillating wildly between Impostor Syndrome & the Dunning-Kruger effect while tweeting about drinking coffee. No matter how much he cries, no matter how much he begs, never feed him after midnight. Adrian joined the team in 2015. 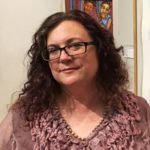 S. Kay Nash is a writer, editor, and bibliophile. Raised by a cabal of university professors, anthropologists, and irritated librarians, she holds two degrees as magical wards to protect her from being hauled back into the ivory tower. Her short fiction has appeared in See the Elephant, Wicked Words Quarterly, and Road Kill 2: Texas Horror by Texas Writers. Her nonfiction appears at Horror-writers.com and Buzzymag.com.  She lives in Texas with a Mad Scientist and a peaceful contingent of cats and dogs.  Kay joined the team in 2020. 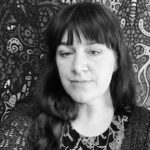 Christi Nogle is a longtime college composition teacher who lives in Boise, Idaho with her partner Jim and their dogs and cat. You can listen to more of her stories at Escape Pod, Tales to Terrify, and The Wicked Library–or read her most recent stories in the literary journals Vastarien and Hermine Annual.  Christi  joined the team in 2020. 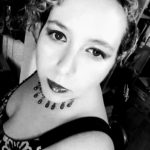 Kitty Sarkozy is a speculative fiction writer, corporate customer service trainer, voice actor and professional robot girlfriend living in Atlanta, GA. She has a rather non-specific set of questionably useful skills, a plethora of hobbies, and almost enough cats. When not writing or on the phone, she stays entertained as a background actor and rogue. Follow her adventures at kittysarkozy.com.  Kitty joined the team in 2018. 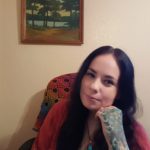 M. M. Schill currently resides in North Florida. She’s a writer, award-winning baker, graphic designer, and illustrator. When she’s not creating, she studies and teaches martial arts. Outside of those pursuits, she’s an outspoken advocate for abuse survivors. She maintains close ties to local survivor volunteer groups and help-centers. She often writes on the topic when she isn’t crafting in her speculative fiction worlds.  M.M. joined the team in 2018. 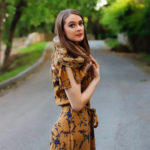 Jessica Ann York is a horror writer whose debut short story is forthcoming in Vastarien: A Literary Journal. She currently serves as the Content Editor of the official Text Request blog and as the Marketing Associate & Webmaster at Authors At Large. Her fiction centers around women who take comfort in using the macabre as a window to understanding their daily anxieties. Through writing and research, she’s come to love the things that used to scare her (like the three baby tarantulas she’s raising).  Jessica joined the team in 2020.