For our 10th Anniversary celebration we teamed with Horror in Clay, numerous authors, and members of the online horror community to make our 10th Halloween something special.

We sucessfully funded our Kickstarter campaign

As part of this campaign, we funded the production of a mug and an anthology that both celebrate what PseudoPod has been and become over the last 10 years. We had an essay for every day of the campaign from members of the community that have impacted and been impacted by Pseudopod.

The Anthology: For Mortal Things Unsung 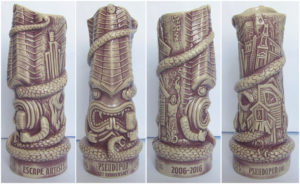 We shared daily personal essays from members of the Escape Artists family including staff, narrators, and authors. Check out essays from:

A Century of Horror

Our Century of Horror Showcase started with the 1960’s and Fritz Leiber’s “A Bit of the Dark World” as our 500th Episode. Over the next year we released a bonus story each month with a representative story from each decade of the 20th Century. These remain available for subscribers, along with our other Extrusions.