Things My Father Taught Me

My father taught me old knowledge, not all of it useful. It was mostly platitudes that sounded profound until you realized that they were just the logic of one’s own wits. But I hold to this: If a man wants to go quickly, he travels alone. If he wants to go far, he travels with friends. Simple, direct, useful. I wanted to go far.

I was with Bwambale when he found the grenade amongst the scrapyard’s refuse. His uncle owned the business, an acre of steel skeletons rising from rust scale sheddings, and we often rooted about the new collections. His uncle was not a generous man, but if he didn’t know what it was that we had found, like the grenade, then we might pick it up cheap. Which is what happened.

And so afterwards, the three of us–Bwambale, myself, and our friend Godfrey–crouched in the dust behind the Soroti central market, looking as if we were throwing dice in its scant shade. The grenade sat between us like a squat little god. END_OF_DOCUMENT_TOKEN_TO_BE_REPLACED

Pseudopod wants to direct your attention to a project by one of our Authors, Greg Stolze. This is a good time to go back and relisten to episode 317, Enzymes.

YOU is a novel, set in the universe of the democratic horror game Unknown Armies, which pits readers against a book that hates them while situating them in the person of a middle-aged businessman named Leo Evans.

Leo is divorced, a fan of racquet sports, and a cultist of the Necessary Servant—a quasi-religion he freely admits seems silly, except for the way it grants him extra senses and paranormal abilities. The chief cultist, however, is his ex-wife, and the two of them clash over a key question of what it means to truly “serve” with integrity.

In the process of hashing all this out, Leo must survive a couple attempts on his life, come to grips with an enchantment that makes him hate the person he previously loved most, and deal with lingering issues between himself and his son.

This novel is Kickstarting in February, check the trailer at www.gregstolze.com/you

Close to the village street stood the one-story house in which Luella Miller, who had an evil name in the village, had dwelt. She had been dead for years, yet there were those in the village who, in spite of the clearer light which comes on a vantage-point from a long-past danger, half believed in the tale which they had heard from their childhood. In their hearts, although they scarcely would have owned it, was a survival of the wild horror and frenzied fear of their ancestors who had dwelt in the same age with Luella Miller. Young people even would stare with a shudder at the old house as they passed, and children never played around it as was their wont around an untenanted building. Not a window in the old Miller house was broken: the panes reflected the morning sunlight in patches of emerald and blue, and the latch of the sagging front door was never lifted, although no bolt secured it. Since Luella Miller had been carried out of it, the house had had no tenant except one friendless old soul who had no choice between that and the far-off shelter of the open sky. This old woman, who had survived her kindred and friends, lived in the house one week, then one morning no smoke came out of the chimney, and a body of neighbours, a score strong, entered and found her dead in her bed. There were dark whispers as to the cause of her death, and there were those who testified to an expression of fear so exalted that it showed forth the state of the departing soul upon the dead face. The old woman had been hale and hearty when she entered the house, and in seven days she was dead; it seemed that she had fallen a victim to some uncanny power. The minister talked in the pulpit with covert severity against the sin of superstition; still the belief prevailed. Not a soul in the village but would have chosen the almshouse rather than that dwelling. No vagrant, if he heard the tale, would seek shelter beneath that old roof, unhallowed by nearly half a century of superstitious fear. END_OF_DOCUMENT_TOKEN_TO_BE_REPLACED

“If you’re unfamiliar with baseball, consider these two things. One, the pitching mound is a lonely place, not only because the pitcher is separated from the rest of the team, but also because he dictates the pace of the game. There’s a very real sense of isolation and pressure. Two, the catcher is both field general and psychologist to the pitcher. He calls the game (suggests which pitches to throw), and when the pitcher gets into trouble, the catcher goes to the mound to calm him down. As such, the relationship between pitchers and catchers is often quite strong. The pair are often called the “battery,” a word with appropriate military connotations, as the pitcher and catcher form a strategic plan throughout an at bat to get the hitter out.”

The beautiful Horror in Clay 01 – The Murders in the Rue Morgue mug Kickstarter can be accessed at the link! Check it out, for the love of God, Montressor!

Randall Simmons only plays night games. As he steps into the right-handed box and taps his bat on the plate, he reminds me why. His smile, aimed directly at the pitcher’s mound, is wide and predatory. The bright stadium lights catch for a moment on his teeth, and even from 60 feet, 6 inches away, I see those teeth are too long and too sharp.

The Eighth Day Brotherhood is a new novel by Alice M. Phillips that should be of interest to PseudoPod listeners. If you want a novel with the milieu of The Stress of Her Regard but tighter pacing, look no further. Couple this with the sensibility of Fincher’s Se7en and you have a tense and relentless thriller. Alice’s love for the tenebrous portions of the Decadent period glows through Paris while the Eiffel Tower rises on the bank of the Seine and as the city prepares of the Exposition Universelle. It manifests with an abiding love for the period supported by an incredible depth of research. Do yourself a favor and pick up this book from Black Rose Writing.

One August morning, in Paris, 1888, the sunrise reveals the embellished corpse of a young man suspended between the columns of the Panthéon, resembling a grotesque Icarus and marking the first in a macabre series of murders linked to Paris monuments. In the Latin Quarter, occult scholar Rémy Sauvage is informed of his lover’s gruesome death and embarks upon his own investigation to avenge him by apprehending the cult known as the Eighth Day Brotherhood. At a nearby sanitarium, aspiring artist Claude Fournel becomes enamored with a mesmerist’s beautiful patient, Irish immigrant Margaret Finnegan. Resolved to steal her away from the asylum and obtain her for his muse, Claude only finds them both entwined in the Brotherhood’s apocalyptic plot combining magic, mythology, and murder. 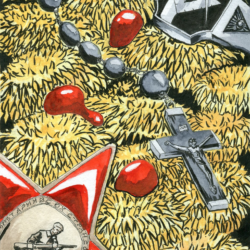