Whispers In The Dark

It’s getting to be around three-thirty, near enough to twilight that this’ll be our last street-cross for the night. It’s been an unproductive five hours; the part of the city we’re in’s got mostly just office buildings and parking garages — not much food to be found. Still, Allen found a few bags of chips left behind by a raided vending machine, so that’s something. As we get ready to head outside, we split up the chips equally between us, so that if only one of us makes it, their fair share will be with them, and not with a gibbering lunatic or a fleshless corpse. Just before Roger opens the door, Allen puts on his facemask. I leave my eyes uncovered, figuring the darkness’ll be enough. Maybe this makes me less crazy than him.

The blackness outside is mercifully total; clouds have smothered whatever light the moon might be able to provide. We head out, turn East, and get into formation: me on the left; Allen on the right; Roger in the middle; about a metre between each of us. We start walking. Between each step we freeze for about five seconds, listening. It rarely helps, listening, but each of us can remember at least one time when it’s saved someone, so we keep doing it. Mostly what we hear is the low night breeze and, every few minutes or so, screams or laughter off in the distance. When it’s laughter, it goes on for quite awhile before stopping.

When it’s screams, it cuts off pretty quick.

It’s been less than a month since… *since*, leave it at that… and I’ve already started to forget what it looked like outside during the day. Right now, the three of us are walking across a four-lane street between two office buildings, I guess, but it’s hard to imagine the open streets and the twenty-storey towers like you used to be able to *see* them. Nowadays, “the streets” are just the blackness around you, the clapping of your shoes on the road, and the smell of cold pavement.

Twenty steps across the void between buildings, I actually *hear* something, a kind of low rasp, like a dying asthmatic, and I whisper: 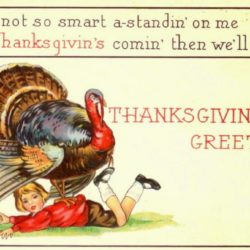 “The Blues” was my attempt at confronting and ruminating on the limits of our adaptability, something not often addressed in apocalyptic literature.

Slusher music is “Green Olives” by Barbacoa from Music Alley

The brick edifices lean over me, red canyons of abandoned history. Despite the lingering warmth of the late valley summer, dried leaves are already piling in the gutters. Without a human hand to clean them I imagine them heaping up, year after year, burying the small town in an endless leaf pile, patiently waiting in vain for a child to leap into them.

Spun off on this chain of images and ideas, I drift away from Alex and lean against the boarded windows of a storefront. The leaves are swirling now with the blues in my mind, the cool colors crackling through the warm autumn refuse. Somewhere in the middle of the conceptual whirlwind, I get sick, the bile rising from the back of my throat bringing an unpleasant fungal taste. I spit as my mouth floods with thin and bitter saliva.

Alex is across the street, leaning against a bike rack, watching me. I try to shake my head, to raise an arm, but I am trapped inside the whirlwind, not sure of its boundaries and borders, not sure if I am enjoying this anymore. Leif and King’s distant, muffled voices blend into the spinning vortex.

‘Nope,’ I manage with great effort. Alex nods and looks away.

The Long Road To The Sea

After enough time had passed for everyone to get unloaded and settled, Mischa gave the order, and the real work began. Throwing open the back doors of the largest truck, he quickly prepped the surgery, then let Colville’s mayor know he was ready.

The first corpse was a young man, maybe twenty or twenty-one, who’d fallen beneath a thresher and bled out before the other field hands could even send for help. One arm was a mangled mess from the crushed collarbone down, but the convoy had been expected and the family had the sense to keep him cold in the cellar.

Mischa accepted the corpse with respect and ceremony, then firmly ushered the hard-faced locals back outside and shut the truck doors, limiting the people in his workshop to himself, his protégé Andrew, and Jimmy to help with the lifting.

Beneath the harsh battery-powered lights, they began. Able to tell at a glance that nothing in the tangle of bone and fiber was worth saving, Mischa and Andrew broke out scalpels and began the process of removing the tattered arm, tying off what veins they could and cauterizing the rest with a hot iron. Taking one handle each, they used a set of bolt cutters to shear through the protruding bone with a sound like a tree being limbed.