“Baby Fingers” is a PseudoPod original

“Polaroid, 1979” is a PseudoPod original

Metal, Sex, Monsters: “As you might be able to tell, this story was written with a Judas Priest soundtrack in mind. While writing it, I listened obsessively to all of Judas Priest’s back catalogue, so that is its main inspiration.”

Curt stares out the into the dark beyond the jaundiced light of the motel sign. He’s got the sawed-off resting across his lap, hands shaking, face white as drywall behind his wild red beard.

I set my helmet down on the dresser, lean myself against the wall. The wallpaper smells like bleach. A fly thrashes between lightbulb and lampshade. TVs cackle through the walls and somehow, over all of this, behind it, the chittering, scratching. Like ants crawling over a microphone. It’s the sound the thing in the bathtub made before it killed Travis.

Curt’s eyes go red, wet. He looks down at his shaking hands, at the shotgun.

Curt nods. “Yeah. I’m a Mongol, Dennis. But I ain’t never seen no shit like that before.” He looks up at me like he’s about to cry. “It…killed Travis.”

A headache builds behind the scratching sound. I try to tell myself that it’s just hearing damage. That emptying twelve rounds in an underground bunker did a number on our eardrums. But that don’t explain everything else. Not even close.

“What’s gonna happen to us?”

Soon as the door shuts behind me, the scratching sounds stop. The night is silent.

The headache don’t go nowhere. I light a cigarette. END_OF_DOCUMENT_TOKEN_TO_BE_REPLACED

The child was dead by the time I found her, but she suited my purposes perfectly.

The flesh was still warm, which is best—too hard to shrug on something in full rigor—and I crammed my bulk into the small body much as one might climb into a box or trunk to hide. A fold here, a dislocation there, a twinge of discomfort and curses when something tore, stretched just too far.

The rent was in the webbing of the right hand. Only a little rip, no matter. The sinister manus was my favoured choice of weapon anyway. I sat up, rolled my new shoulders—gently, carefully—then stood, rocking back slightly on legs too tender, too young to support my leviathan weight. I took a step, felt the world tilt, caught my balance before I fell and risked another tear; looked down at the single pink shoe, with its bows and glitter detail; took in the strange white cat face that ran around the hem of the pink and white dress; rubbed my miniature fingers against the dried brown stains that blotched the insides of my thighs.

The child had died hard.

The sliver of me that retained empathy ached, just a bit. But I could smell the scent of the one who’d done this and I would follow that scent. The hunt was on, my blood was up. Time was of the essence—my presence will speed decay. I pitched my head up so my nostrils caught the evening breeze and breathed deeply, filling my borrowed lungs, so the memory would remain.

Again, I took a step, more, all steady.

You never told me she’d be so human, so sweet. Marzipan bones and caramel hair, latte skin stretched taut over a face still new to wanting. Just a mouthful, really, a morsel, her eyes brittle as she watches us flit by, heartbeats sliding between the ribs of time.

In Europe, no one believes in kismet, but who needs faith to author fact?

Later, you joke about serendipity. I nod in silence, my fingers still glazed with her cells and her atoms, the taste of her bitter with ghosts of Sunday afternoon pasts. How many street corners have you kissed on? How many does she remember? How many times has she sat coiled by her phone, waiting, waiting, thumbing through pictures of you together, a patchwork of possibilities that should have spelled out a future?

END_OF_DOCUMENT_TOKEN_TO_BE_REPLACED

“Anybody down there?” Diane called.

“Hello?” A voice called back.

“Thank god for that,” Diane whispered.

We started along the rattling path, into the mist. “Hello?” called the voice. “Hello?”

The bus turns left off Langworthy Road and onto the approach to the A6.  Just before it goes under the overpass, past the old Jewish cemetery at the top of Brindleheath Road and on past Pendleton Church, it stops and Dermot gets on.

He gets a few funny looks, does Dermot, as he climbs aboard, but then he always does.  It’s hard for people to put their fingers on it.  Maybe it’s the way his bald head looks a bit too big.  Or the fishy largeness of his eyes behind the jar-thick spectacles.  The nervous quiver of his pale lips, perhaps.

Or perhaps it’s just how pale he is.  How smooth.  His skin- his face, his hands- are baby-smooth and baby-soft.  Like they’ve never known work, and hardly ever known light.

All that and he’s in a suit, too.  Quite an old suit, and it’s not a perfect fit- maybe a size too large- but it’s neat and clean and well-maintained.  Pressed.  Smooth.

And of course, there’s the briefcase.

It’s old-fashioned, like something out of the ‘seventies, made out of plain brown leather.  He doesn’t carry it by the handle.  He hugs it close against his chest.  Like a child.

The double barn doors were secured by a length of stout, rust-encrusted chain, fastened with an old padlock.

Marilyn hefted the lock with one hand and tugged at the chain, which did not give. She looked up at the splintering grey wood of the doors and wondered how the children had got in.

Dusting red powder from her hands, Marilyn strolled around the side of the old barn. Dead leaves and dying grasses crunched beneath her sneakered feet, and she hunched her shoulders against the chill in the wind.

‘There’s plenty of room for horses,’ Kelly had said the night before at dinner. ‘There’s a perfect barn. You can’t say it would be impractical to keep a horse here.’ Kelly was Derek’s daughter, eleven years old and mad about horses.

This barn had been used as a stable, Marilyn thought, and could be again. Why not get Kelly a horse? And why not one for herself as well? As a girl, Marilyn had ridden in Central Park. She stared down the length of the barn: for some reason, the door to each stall had been tightly boarded shut. 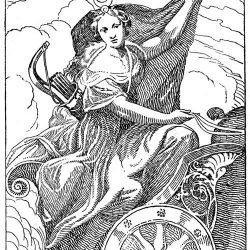 The Godsmaid Clara and Her Many Smiles

‘Godsmaid,’ I say, and the butler’s eyes immediately glaze over. That’s pretty much always the case. It’s remarkable how little attention they pay me, how consciously their eyes slide over me as soon as I’ve announced my profession. Too dirty and gross, too much something no one wants to think about. Not unless you have monsters crawling all over the floor, anyhow. Of all people, the butler should know me, should appreciate me, but he’s new; I haven’t been here often, but often enough to have known his previous incarnation.

‘We have no need of one at present,’ he said. ‘Thank you for your offer, madame.’

‘I have an appointment, sir. His Lordship requested me,’ I say, and this time he actually looks me in the eyes.

‘Does he need you now?’ he asks dumbly, and I just smile at him, my polite society smile that says I’ve said what I must, and after a minute he sort of nods at me and leads me in.

I could walk the way myself—there are servants’ stairs that I’ve used before, and they’re quicker besides—but truthfully I get tired of being dismissed to the servants’ entryway, and the gentleman who made the appointment assured me I could use the front. Nevermind I am a servant. Not many people can do what I do. Well, not many people would care to, but even so.

A few of the other servants raise their eyebrows as I pass down the hallways, but nothing more than that. At least one of them recognizes me, from the way he quickly looks away. I do murmur, “It’s not catching, you know,” and the butler turns around to me, frowning, but I just smile and he keeps walking. The man I was actually talking to swiftly trods away from us.

The author says: “Best listened to with a cuppa and biscuit? This piece would not exist were it not for a tour of the Monterrey Aquarium by friend and fellow author, Pat McEwan, whose explanations of the strangest of sea life inspired the story.”

We mourn the loss of Larry Santoro. Please visit http://www.cancer.org/ and http://www.imermanangels.org/ to learn more about cancer support.

Also, Saladin Ahmed could really use your help.

After finding the dell, we walked homeward in a more subdued fashion. After only a few steps, the contemplative silence was broken by the rustling of leaves behind us. We stopped in our tracks. We’d outrun Deaths all our lives and, in high Season, had even gone off into the desert to protect ourselves. More than enough females were willing to accept them into themselves and breed for as long as their accelerated aging would allow. There were always those that wanted to bear young. But that wasn’t Chalen or myself, thank you. We had our voices and our music and our fans. That was enough.

Something about that sound in that place, though, froze us. Then, as we listened more carefully, we could hear that there were more on both sides of us boxing us in. We began to run toward the house and the hedges. Sanctuary.