I have not performed since that evening, and even now I do not know if it is merely psychological or if there is some greater, unseen force at play. I cannot tell, nor do I have the means to explore the matter. It is my hope that perhaps penning a recollection of that evening will cure me. I miss the work. It was mine. I miss that small part of myself, and I have so little left to hold on to now.

In any case, I know these two things to be true: that I have not performed since that night, and that what I witnessed then was as real as the nose on my face. As real as anything can be real. END_OF_DOCUMENT_TOKEN_TO_BE_REPLACED 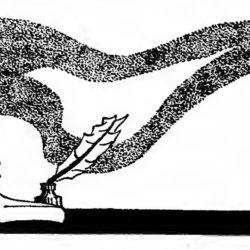 Joe “Fresno” Talley dropped his cigarette butt on the sidewalk and ground it out with his foot, careful not to step on it where the hole had worn through his shoe sole. Absently he felt in the pocket of his shabby trousers, before remembering. No more cigarettes; that last one had been picked up out of the gutter, in front of a theatre whose twinkling marquee had once spelled out his name in lights a foot high…

Fresno snarled deep in his throat. So what if he had taken a couple too many that night, in Pittsburgh, when he was playing at the Roxy? So he had muffed a card sleight, dropping the whole pack all over the stage, then fallen flat on his face trying to pick them up. Was that a crime? Was that any reason for his booking agent to be dodging him now, after telling him that seven cancellations in a row meant a magician was washed up? He’d show that crumb!

Digging a half-empty flask of cheap whiskey from his hip pocket, Fresno finished it at a gulp and shied the empty bottle at a scrawny gray cat, hunting for scraps in a nearby trashcan. The cat yowled and scampered out of range, limping. Fresno laughed nasally. Nothing wrong with him; his hands didn’t shake too much, or he couldn’t have hit that mangy old…

Shivering suddenly as the chill night wind cut through his loud striped shirt, he paused before a rickety old tenement where his aimlessly wandering feet had taken him. A sign beside the door read:

END_OF_DOCUMENT_TOKEN_TO_BE_REPLACED

This story was also reprinted this month as part of Nightmare’s special issue People of Colo(u)r DESTROY Horror! Read along with the story over at their site. Listen to two more stories from this issue over on the Nightmare podcast feed, and add it to your podcatcher while you’re at it!

The camera crew struggled with the twisting, narrow stairs. Their kit was portable, Steadicams being all the rage. They were lucky that the nature of their work did not require more light. Shadows added atmosphere. Dark corners added depth. It was cold down in the cellar. It turned their breath to mist, which gathered in the stark white pools shed by the bare bulbs overhead.
Martha smiled. It was sublime. Television gold.