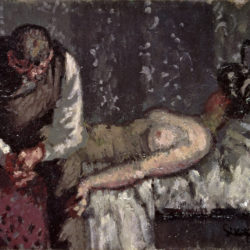 This story is inspired by the very real painting by Walter Sickert, the artist who is suspected by many to actually be The Ripper himself.

Info on “End Is Nigh” can be found at the Amazon link (music under the promo is “Meet me at the place” by Glass Boy, available at: Free Music Archive).

“Come through,” the landlady said. “This will be your room.”

The lodger stood in the doorway, afraid that stepping into the room might shatter its illusion for good. For after months of searching, he had finally found the inspiration behind Walter Sickert’s masterpiece, *Jack The Ripper’s Bedroom.*

Longer and narrower than the others he had been shown, its floor slanted uneasily to the window. The same anaemic light that Sickert had bathed his room in, seen through a flexing eye recently shorn of its cataract.

The landlady gestured for him to admire the view, to look at the further world beyond the glass: a lofted city within a city, consisting of streets of rooftops, of other windows. Smoke curled from clusters of chimney pots; to the lodger, each weary fume represented a soul in ascension. Further, the serene blue of the river was captured in the channels between dark maritime warehouses, as twelve chimes rose deep and clear from an unseen chapel.

Drawing his attention away from the window, a macaw, or some other exotic breed, now stirred within its dulled bronze cage. The raw pink spindles of its feet gripped the perch as it shifted awkwardly, keeping in its blue, green and yellow feathers. He noticed a jagged hole in the drip of its beak, imagining a nail had been driven through; while eyes bruised as cobbles seemed to swell and throw back only a cold, blanked universe.

Had Sickert portrayed such a bird, hidden in some dark corner of his painting? Pecking at its small, chained mirror, he wondered if it had been changed entirely when first confronted by its own image. What the bird had imagined itself to be before.

“I can remove him if you would prefer? Though he’s been here longer than any tenant. I’d hate to issue the eviction notice at his age.”