Effie Seiberg: “As a card-carrying wuss, this is the first horror-eque piece I’ve ever written. This story finally lets me say that my work can be found in every single Escape Artists podcast, which is very exciting because I’m a wuss when it comes to horror and never thought this day would come. Perhaps the scariest part, to me, is how we have a culture where it’s somehow ok to treat customer service folks like trash even when they’re not responsible for whatever mishaps you experienced.”

In Regards to Your Concerns About Your ScareBnB Experience

I’m so sorry to hear your family had a negative experience at our ScareBnB. While we aim to provide an atmosphere of family-friendly spooky overnight fun, I see that with your family’s unique experience we’ve missed the mark.

You’re right, the blood dripping down the stairs to the abandoned attic was a slipping hazard. However, we did have signs clearly stating that guests should not go up the abandoned attic stairs for precisely this reason. You’ll be glad to know that the stains will eventually come out of your family’s clothes with a little bit of bleach, but unfortunately the curse we use to keep the bloodflow going is non-removable, and your clothing will continue to drip.

After their arrival into the (closed off) attic, I understand that your children were distressed by the sounds of our attic ghost. However, after reviewing the logs and interviewing the performer on shift, Alex of the Screeching Chains, it appears that the upsetting sounds were of Alex weeping after your offspring doused him in several cans of WD-40 and tried to set him on fire. We encourage our performers to stay in character and will send him an appropriate reprimand once he’s out of the hospital. END_OF_DOCUMENT_TOKEN_TO_BE_REPLACED 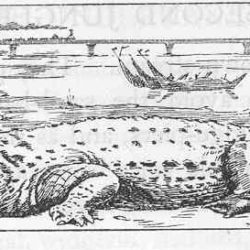 Dream Foundry is a new organization helping all professionals, especially beginners, working in the speculative arts. Back their Kickstarter to make sure they last and grow, and to get yourself some nifty rewards.

When ye say to Tabaqui, “My Brother!”
when ye call the Hyena to meat,
Ye may cry the Full Truce with Jacala–
the Belly that runs on four feet.
–Jungle Law

It was a thick voice–a muddy voice that would have made you shudder–a voice like something soft breaking in two. There was a quaver in it, a croak and a whine.

END_OF_DOCUMENT_TOKEN_TO_BE_REPLACED

This episode of PseudoPod is brought to you by AMC Shudder. Check out Shudder’s great content at shudder.com and use promo code pseudopod for a free 30-day trial. What’s waiting for you in this trial? Shudder is a premium streaming video service, super-serving fans of all degrees with the best selection of horror and thrillers. Not only classics you know and love, but a couple less visible gems that we want to draw your attention to.

Firstly, The Old Dark House is a classic horror film created just before the Hays Code dropped, so there’s some content that is particularly shocking for its 1932 release date. This also was inspirational for a young Ray Bradbury and his Uncle Einar stories, which were inspirational for the artist Charles Addams. Secondly, Murder Party is an exceptional entry in the black humor end of the genre, made all the more striking if you know any struggling creatives. I first saw this at a horror film festival wearing my Army of Darkness shirt. One of the filmmakers greeted me at the door, and noting the shirt, assured me I would love their film. They were not wrong.

The thing I’m most looking forward to is the Shudder original series released this week — Critters: A New Binge. I have an arguably unreasonable affection for the Critters franchise, as they indelibly scarred me as a kid. Head over to shudder.com and use promo code pseudopod for a free 30-day trial.

Konomoro, wisest of the witch doctors in the seven tribal councils, felt uneasy deep in his red heart. The Norseman standing before him was stark naked and drenched in blood that gushed from hundreds of ornate, foreboding runes carved in his body.

The City of the Gone Away

I was born of poor because honest parents, and until I was twenty-three years old never knew the possibilities of happiness latent in another person’s coin. At that time Providence threw me into a deep sleep and revealed to me in a dream the folly of labor. “Behold,” said a vision of a holy hermit, “the poverty and squalor of your lot and listen to the teachings of nature. You rise in the morning from your pallet of straw and go forth to your daily labor in the fields. The flowers nod their heads in friendly salutation as you pass. The lark greets you with a burst of song. The early sun sheds his temperate beams upon you, and from the dewy grass you inhale an atmosphere cool and grateful to your lungs. All nature seems to salute you with the joy of a generous servant welcoming a faithful master. You are in harmony with her gentlest mood and your soul sings within you. You begin your daily task at the plow, hopeful that the noonday will fulfill the promise of the morn, maturing the charms of the landscape and confirming its benediction upon your spirit. You follow the plow until fatigue invokes repose, and seating yourself upon the earth at the end of your furrow you expect to enjoy in fulness the delights of which you did but taste. END_OF_DOCUMENT_TOKEN_TO_BE_REPLACED