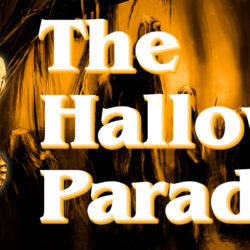 The parade this year feels brittle. At least at first. It reminds you of that first step into a swimming pool, wondering if it will be too hot or too cold. You brace yourself for sharp contrast, face the suck, breathe through it. And then you’re there.

There’s an opening act waiting for you — the horror of wondering how many participants and attendees will be masked. No float. Just you, your too-conscious breath, and too many visible faces for complete comfort.

Nonetheless, you settle in a good spot. With churros in hand and your own mask nearby, you wait for the parade to begin.

The Controller walks the road as she always does, masked as she always is now, and then turns. Spreading her hands wide, the street fills with smoke… END_OF_DOCUMENT_TOKEN_TO_BE_REPLACED

It’s time. Nestled beneath the rolling peaks from the mountain ranges, honeycombs of caves spread out in their like swollen slugs providing shelter from the weeping clouds. Raoul emerged from one of those caves. He scratched his scalp beneath his thick dreadlocked hair and squinted against the rain pouring across the lands.

The black, whispery rain fell, chasing all indoors, turning the roads further down the city to a glistening dark. Desperation clung to each drop, splattering on the surface. Once, a bustling metropolis existed, but now, only disappointment remained. A hush blanketed everything. Only the rain’s soft drumming resonated throughout the valley, its melody rising up against the thick, humidity.

“Great. Monsoon season.” Raoul, a tall, athletic man, shrugged against the cold rain, bouncing off the trees and splattered onto him. The bleak morning stretched onward, hovering in its gloominess. He adjusted his hood, flexing his feet inside his rain boots. Parts of him felt stiff and others felt foreign. The dark skin held hints of coily hair.

Yet, different didn’t mean bad, but new. Raoul jumped up and down on the balls of his feet, before hunching back into his sweatshirt. From inside the cave’s mouth, he peered out across the city’s broken landscape of abandoned storefronts, flooded and cracked sidewalks, and gloomy pedestrians. He couldn’t see their faces from this distance, but their bodies spoke for them. Bent over, slow moving, they creeped along in the squall as if their spirits had been drenched with sadness and despair. END_OF_DOCUMENT_TOKEN_TO_BE_REPLACED

I just wanted breakfast. Coffee, maybe an egg with spinach. But before I even stumbled over to the coffeemaker, a sprawling net of pasta stopped me. It stretched from the ceiling to the cabinets to the floor; its many strands twining like a starchy spider web across the narrow galley kitchen.

This wasn’t normal. This wasn’t a normal, 6:45, no coffee yet situation. Had my roommate thought this would be a fun prank? I looked at the taupe crisscrosses of dry noodles between me and the sink. If Jonas had made this, he’d done an incredible job hiding his joinery; it seemed like a real spun web with no visible glue or tape holding it together. Empty boxes littered the floor in ragged shreds, and I wondered what recreational substances had inspired this mayhem.

“Jonas! Get in here!” END_OF_DOCUMENT_TOKEN_TO_BE_REPLACED

Cockcrow Inn stands defiantly facing the sea. For countless years it has stood thus, holding at naught the greatest strength of wind and water, quite careless of the dazzling thunderstorms which on sultry summer evenings attack it as though with lifted sword-blades—a staunch old dwelling raised by hands long gone back into their native dust. And on wild winter nights, when the waves thunder out their war-song on the beach, when the wind screams its challenge to the sky, when all nature’s resources seem bent on destruction, the windows of this hostelry twinkle cheerily for lonely travelers by land or sea. It feeds the hungry and warms the cold; and only once in all its ten-score years has it failed to ward off the spirits of darkness which, if the villagers are to be believed, infest the moaning caves of Wishbone Point. END_OF_DOCUMENT_TOKEN_TO_BE_REPLACED

Proverbs 16:31 – Gray hair is a crown of glory; it is gained in a righteous life.

When I Was Young, I Did Not Need Magic

I suggest you don’t try to struggle, my dear.

I’m sure you thought this would be easy. What danger is an old woman, all alone? In and out, simple. Help yourself to the purse on the kitchen table. Grab some jewellery – probably just lying around. Perhaps the Hummel figurines if you’ve any sort of an eye. My shopping bag, to put it all in. Leave the television – it’s too bulky, and who watches television these days anyway, hm?

It’s gone rather differently, hasn’t it? The best laid plans, and all that. Not that, I suspect, you planned very much. END_OF_DOCUMENT_TOKEN_TO_BE_REPLACED

From the author: “The speculative elements from this story are based on the death masks found in the grave circles at the site at Mycenae. I have taken serious artistic liberties with the archaeology and the language, Linear B.”

The whole ride back to the village I hold you steady in the bed of the pickup, praying the straps hold, the wood isn’t rotted, that you won’t be tumbled into dust before I even get you out. Every dip, every hill crested, my heart jumps into my mouth. Sweating, I look eastward, watching for light creeping back into the sky.

It’s morning by the time I get you back and into the house. Relief of a cool entryway, of knowing you’re safe in the garage below the tiles under my feet. Birdsong comes in through an open window somewhere. I wash the dust off my skin and it pools, red, around the drain.

I crawl into my sleeping bag for a few hours, then sit on the balcony to watch the sun move. It dips behind the ridge to the west, but I wait, chewing my cuticles, for true sunset. When it is well past the horizon, when it is safe, I go downstairs.

Now that I have you, I don’t feel rushed. The house, paid up for a month, has olive groves all around. It sits in a construction site, the builders paid to go away. In the village near the dig site they are used to archaeologists, to not asking questions when something needs to disappear. This is not even the first time Christos has been asked to drive to the site after dark. I will find out later that the fee he charged me is a standard one. END_OF_DOCUMENT_TOKEN_TO_BE_REPLACED

The Honey Witch
By Kathryn McMahon

My hood and gloves are on the table next to the smoker that, for now, remains unlit. Its charred pine needles quiet the bees and mask their alarm, a perfume that smells, improbably, of bananas. I don’t need the smoker at the moment and if I used it, I wouldn’t be privy to the hive’s secrets. I sniff. Wafts of apple linger with thyme that grows between the orchard rows. And lemon, the Nasonov pheromone calling the bees back home. Usually, a few would be dancing now, telling their sisters about the nectar they have found. But just as my sinuses throb, the bees feel the air pressure dropping. A storm is on its way. END_OF_DOCUMENT_TOKEN_TO_BE_REPLACED

We’ve All Gone To The Magic Show

Earlier this summer, word spread around our town that the Magic Show’s doors were open. Swollen and stained timbers that once barred the entrance were found scattered about its front stoop among a pile of last year’s dead leaves. The double doors, famously ornate from a lavish bygone era, stood half-open in offering. The building was a converted brick rowhome sandwiched between two residences and had always been there, I think, but no one could say for sure. Not then, and certainly not now. Anyone who might’ve offered conjecture to its origins is gone now.

All I can offer in explanation is that it’s been here for as long as I have, and I was born in this little hamlet. While the other townsfolk called it by its name—THE MAGIC SHOW—after the chipped and peeling sign which hung above the entrance, I employed another name for my own private amusement, Mannequin House, after its bizarre form of decoration.

Two mannequins stood in the storefront windows against a backdrop of thick black curtains. The figures were often shrouded in patchwork garb to reflect the season or holiday, from bathing suits and sunglasses on the 4th of July to jeans and sweaters for fall. Eyeless, expressionless, they stood on display to anyone who passed by on the sidewalk, silent sentinels for our little town. To new residents and tourists, the storefront offered nothing more than a curious mystery and a general eeriness inherent in the presentation: Just who maintained the storefront windows? And why was the entrance boarded up?  END_OF_DOCUMENT_TOKEN_TO_BE_REPLACED