Position: Overnight home companion for shut in. Must be able to read. Lack of imagination a plus.

Salary: 250 dollars a night. I’ve never seen who pays. But the cash is there every morning at sunrise. A brown paper bag in the mailbox, twenties and tens. Good money, right? But I need to explain some things. I don’t want you coming in blind like I did.

Pros: No adult diapers to change. In fact, you’ll never even see Mrs. Hendricks. I’ve been doing this for three months and the only reason I know her name is it’s written on the letters on the kitchen table. There’s an old dirty curtain hanging across the back half of the bedroom. I imagine Mrs. H. behind it, all tucked in beneath her covers. I’ve never looked though. YOU DON’T LOOK BEHIND THE CURTAIN.

Cons: Patti Puddleduck’s Play Date. It’s a kid’s books. Illustrations so cute they’re creepy. The book is on the chair when you get there. Cute story. Patti Puddleduck has a picnic, invites all her friends—Betty Blackbird, Reggie Rabbit, Freddie Fishfin. You get the idea. Reading the book is the gig. Seriously. Most of the time what’s behind the curtain (Mrs. H. I mean) is quiet. But when you hear a noise. You pick up Patti Puddleduck’s Playdate and you read aloud. Usually, the noise will stop right then. But I read it all the way through a couple times just to cover my ass.

And when the wind stops, replaced by a hot breath against the back of your neck, read loudest of all and pray if you know how.

When it’s completely quiet. No breath. No wind. Not even the rustling noise of an old lady adjusting her blankets. Then you can turn back around.

I thought about quitting. I have enough cash to get a car. Maybe head out west. But during the day, when I sleep, I have dreams. In the dreams, I pull the curtain back. Did you know that’s the definition of apocalypse, to pull aside the curtain? I can’t quite remember what I see in those dreams, But I wake up crying and reciting lines from Patti Puddleduck’s Playdate. I only know it’s something vast with too many eyes. Eyes that are also mouths.

I don’t believe I can quit. But I can’t go on either, not without a few nights off. Which is where you come in. The money’s good for just staying up late and reading. Like I said, lack of imagination is a plus.

Weapons They Gave You to Fight the Blood Monster

Mum cried when the blood monster came, leaving a red slug-streak as it slid into your room. It oozed onto your bed and extended one dripping hand. You glanced at Mum, who sighed and said, “Better get it over with.” The monster’s grip made you cry out in pain.

Mum gave you many kinds of cotton to wrap the monster in, showed you how to swaddle its angry clot of a face. That didn’t stop the monster hurting you, sneaking its sticky fingers from its wrappings to pinch your belly until you wept. But at least it was hidden, so it wouldn’t scare your brothers.

The monster bled through it all. It bled through clothes, through sheets and mattresses, through every product Mum gave you. When you pressed a pillow down on its ugly face, it bled right through the stuffing, materializing like mince from a meat grinder.

Magazines said you needed pills. They didn’t explain very well, but there was some hormonal magic that could repel monsters. For some girls, anyway. You were determined to be one of the lucky ones. The monster reached over your shoulder and dripped onto the page as you read, chuckling.

The pills made you sick at first, but then you felt better. The monster hid under your bed, where good monsters should stay. You attended pool parties. You rollerbladed in white denim shorts. You had your first kiss, your first boyfriend. At night, the monster muttered, counting months on its slimy fingers. You closed your eyes smugly, thinking you’d won. Until one day, you woke up, covered in its blood.

Instagram suggested a change in attitude. The monster could be your friend. You should talk about her at parties, let her bleed freely in the wilderness, embrace her until you loved her as part of your divine femininity.

You glanced at the monster, which was pulling clots from its belly and eating them, and ran to the bathroom to throw up. You never did finish reading that post.
Years passed. They gave you diets. They told you to de-stress. They suggested acupuncture and pills and physical therapy and pills and pills and pills. Nothing worked.
The latest doctor smiled. There’s a simple solution, he said. Monsters love a void. You need to fill that hole in yourself.

So you took his advice to heart, and grew your own monster. It hurt, but you told yourself it would be worth it. You told yourself that your monster would be fierce, that he would grow so big that the blood monster would retreat. The way he kicked inside you convinced you he was ready for battle. He emerged with a warcry. You screamed with him.

It didn’t work. The blood monster is twice the size it once was. It pinches you twice as hard. And now there’s a new monster in the nursery, crying, crying, crying. His mouth stretches to swallow you.

Since he’d returned from deployment, Luis’s baby girl was shy around him. Unsurprising–he’d shipped off when she was months old. Now, she was in pre-school. He was a stranger to his little Vanessa. What a relief when she wanted to play with him all afternoon. Taking her cue, Karynne slipped out for a few much-needed hours alone. Luis couldn’t wait to show off how much he and Vanessa had bonded.

Luis sat down so Vanessa could look into his eyes. She’d laughed as he’d pretended to be a bulldozer, making revving noises as he pushed a collection of toys, plushies, and board books into piles around them.

“That’s not my name!” She giggled before crowing, “My name’s VAN-essa!”

“That’s right,” Luis said. He bonked his palm against his forehead. “I forget sometimes. How about–” He reached out to tweak Vanessa’s nose between two fingers, pulling back with his thumb pinched between them. “Got your nose, kiddo.”

Vanessa screamed with laughter, running in circles around him as he held his hand out of her reach. She half-climbed on Luis with her hand outstretched, trying to get her nose back. Maybe sugaring her up with three bowls of breakfast cereal hadn’t been wise.

At last, he relented and pressed his hand to Vanessa’s face. She touched her face to make certain, erupting into gales of laughter.

Luis shrugged. Still laughing, Vanessa stepped up to him, curled her pudgy little hand around his nose and–

He raised a hand to his face, fingers brushing the patch of smooth skin where his nose should be. No puckering, no gnarling of skin and cartilage like so many people he’d seen overseas, nothing.

As if he’d never had a nose.

He gulped air through his mouth. Don’t panic, don’t panic, play it cool–don’t traumatize her.

“H-honey, could you come here?”

Without his nose, his voice made Vanessa laugh harder. She skipped away, keeping her arm out of his reach. Then, darted under him and curled her hand around his foot.
“Got your foot! Got your foot, Daddy!”

His leg now ended in a smooth stump. Luis bit back a scream. Reminded him of that local kid in Fallujah, minus the scar tissue. He sucked a shuddering breath through his mouth as he turned.

Howling with laughter, Vanessa touched his other foot and it vanished. Luis whined deep in his throat, crab-walking toward the front door. He stretched an arm back, hoping to reach the doorknob. Instead, a pile of candygloss-bright plushies toppled onto him with a collection of squeaks.
Vanessa tagged his outstretched hand. Now, she laughed so hard her face turned purple, upper lip shining with mingled tears and snot.

“Got your hand!” She shrieked.

“Nessa–” Luis wanted to say, Playtime’s over, but was cut short when she rushed at his head with arms outstretched, still giggling. 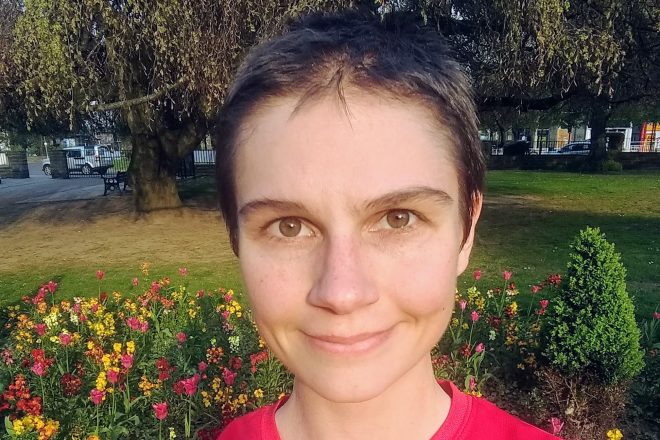 Hannah Whiteoak is a copywriter and short fiction writer from Sheffield, UK. Hannah placed third in the 2020 Escape Pod flash fiction contest with The Day the Sun Went Out, and their work has also appeared in Flash Fiction Online, Luna Station Quarterly, and Okay Donkey Magazine. You can find Hannah online at hannahwhiteoak.me or on Twitter @hannahwhiteoak, where they post daily microfiction. 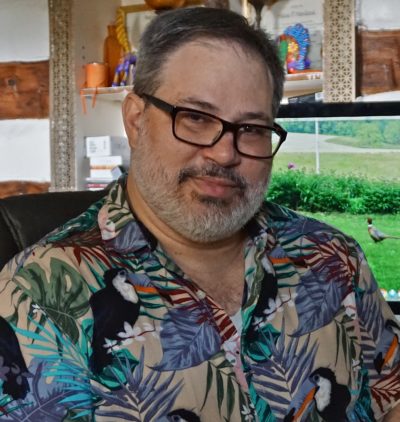 Karlo Yeager Rodríguez is originally from the enchanting island of Puerto Rico, but moved to the Baltimore area some years ago where he now lives with his wife and one odd dog. His fiction has appeared in Nature, Uncanny, Beneath Ceaseless Skies, Speculative Fiction for Dreamers, Seize the Press, and is forthcoming in Pseudopod.

In addition to writing, Karlo has narrated stories in Strange Horizons, Podcastle, Pseudopod, and Escape Pod and is the host of the Podside Picnic podcast. 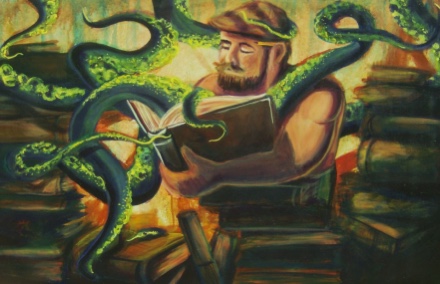 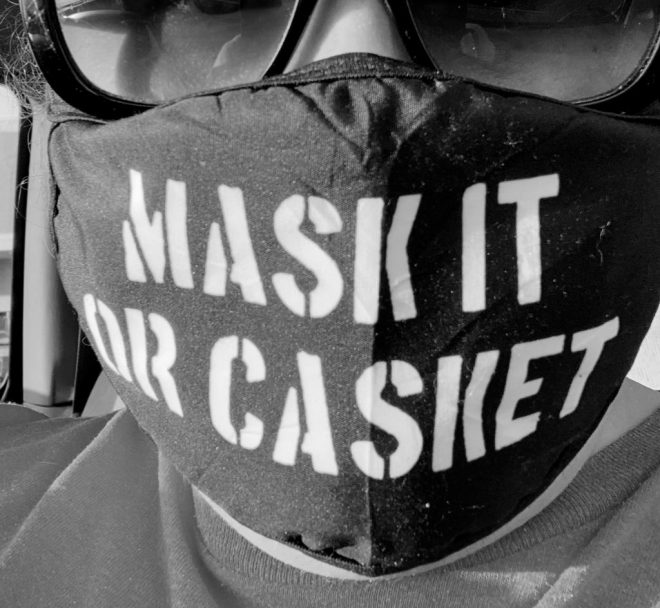 Sevatividam is writer, voice actress, singer/songwriter, political messaging strategist and hooligan who works for the political action committee Mad Dog PAC helping to annoy corrupt politicians with snarky billboards. Sev is a “GRITS” (a “girl raised in the South”) who grew up in Atlanta, and she’s never been to England before, but she wants you all to know that she really worked hard to research and practice this accent. She’s hoping to get a proper studio demo recorded of her song “Agnostic Gospel” done this year, and she’s beginning to feel the itch to process some personal demons into a very heavily Depeche Mode influenced album of new songs. She really enjoyed voicing the grumpy fairy. 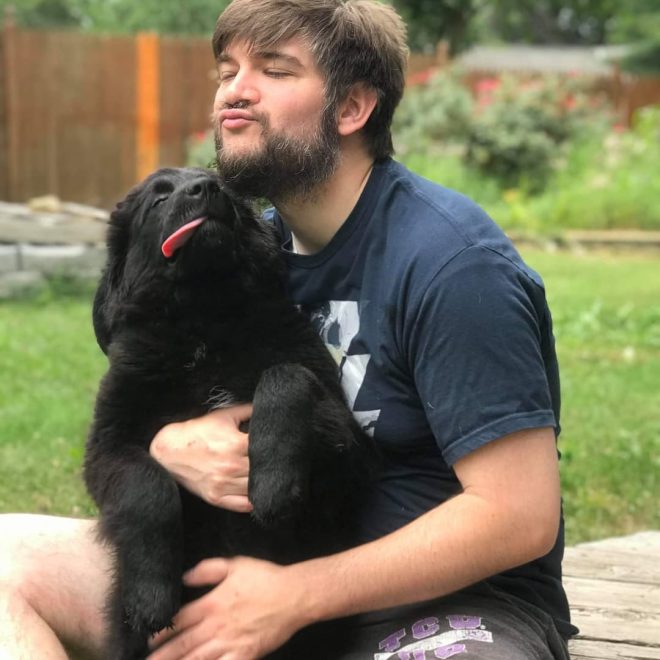 Dennis is a content creator from the haunted historic town of Gettysburg Pennsylvania. While a consultant by day, he is a podcaster, comic creator, and millennial dog dad the rest of the time. He has been podcasting over the last 6+ years on Botched: A D&D Podcast. An improv comedy podcast draped in the loose skin of Dungeons & Dragons, while indulging in the occasional drink. You can find it on any podcatcher and over at botchedpodcast.com or patreon.com/botchedpodcast. Dennis has recently launched his own series of horror mythology comics called Lycan: Solomon’s Odyssey. The story of the world’s first werewolf. Feel free to check it out over at hiveheadstudios.com where you can even pick up a free sample in pdf format. Feel free to support him over at patreon.com/hiveheadstudios if you’d like to get behind the scenes access to his future books. The next Kickstarter launches in September of this year, so keep an eye out with lycanbook.com.

Karlo Yeager Rodríguez is originally from the enchanting island of Puerto Rico, but moved to the Baltimore area some years ago where he now lives with his wife and one odd dog. His fiction has appeared in Nature, Uncanny, Beneath Ceaseless Skies, Speculative Fiction for Dreamers, Seize the Press, and is forthcoming in Pseudopod.

In addition to writing, Karlo has narrated stories in Strange Horizons, Podcastle, Pseudopod, and Escape Pod and is the host of the Podside Picnic podcast.