“The Greek countryside crawls with legends of undead. They are a blend of what we today call vampires, ghouls and zombies, and they almost always meddle with the living. I have a book with such folktales by my desk for reference. So when during a writing challenge I was required to reach for the three nearest books to find inspiration for a story, my hand went for that particular book on its own. (The other two were a recipe book for traditional Greek dishes and a psychology manual on the five stages of grief. I guess they mixed well).”

You beg your son to try just one spoonful. He doesn’t. He sits rigid, his palms on his thighs, his almost-glassy, bloodshot eyes fixed ahead. There’s nothing there, only the old armoire filled with mothball-smelling clothes from three generations back. You try passing the spoonful beneath his nose. He loved your magiritsa, your son.

Perhaps a story will do the trick, just like when he was a child? The war robbed you of husband, brothers, savings, dignity, even fairytales. So instead you tell him about your day: how the butcher gave you the stink-eye when you asked for lamb’s offal. Lent has just started, and you’re making Easter Sunday soup already? When you mention it’s for your son, the war hero, he nods and brings what you asked. His own son returned from the war damaged as well—more than yours, and this simple knowledge fills your heart with guilt and relief in equal parts.

Your boy didn’t return wearing his shroud. When he slurps a spoonful of barely-cooked lamb’s innards, you tell yourself that all will be fine.

Damn this town! Damn the gossiping shrews who spy on your affairs! Damn their whispers that follow you everywhere: at the baker’s, the grocer’s, at the post office. Only at the butcher’s they keep their mouths shut, for respect—or fear?–of his haunted gaze and the son he keeps locked at the back.

Katachanas, they say and spit on the ground. Vourkolakas, and cross themselves.

Ah, all those God-fearing, proper people observing Lent, abstaining from meat but not from gossip… What do they know? Do they know of courage? Of sacrifice? Of all the sleepless nights, watching him sit rigid still, praying that he won’t move and recounting your yaya’s tales of the undead who leave their graves to mingle with the living?

Your son returned a hero, but only the sound of your knitting seems to bring him some peace now. Then his shoulders relax a little, and sometimes he even blinks. His eyes are more opaque now than bloodshot, and his lips split and bleed. What good are his medals now? You hurl them across the room, the useless trinkets. They land beneath the armoire, amidst the dust and cobwebs. He doesn’t even notice.

You bring the priest—again. Papa-Nikolas won’t set one foot indoors. He mumbles a blessing from the doorstep, whisking away the sprigs dipped in holy water to every possible direction, and then some. He wants to leave there; his ever-darting eyes, his fidgeting hands, his bitten lower lip tell a different story than the holy words he forces out of his mouth.

You slip him some extra money. You try to barter. Perhaps a donation? But what can you offer that he values?

You’re broke. Everyone’s broke, except for those who collaborated with the Nazis. All that’s left is that leaking roof over your head, an armoire of your yaya’s yellowed linen and useless trinkets, and a broken son.

Papa-Nikolas bolts, mumbling that, “It’s all in God’s hands now.”

And you remain still, your heart as empty as your son’s stare.

There is no God.

You hear the news two steps out of the house: last night, the butcher cleaved off his son’s head, then blew out his own brains with the Luger he’d kept from the war.

Too many slaughtered chickens and gutted goats lately, they say, and even a mule one town over. Wolves, they’d mused at first, and shrugged it off. But no wolf climbs up windows to steal babes from their cribs. What if the child was returned to his crib the following evening, scared but unharmed? The next child wouldn’t be so lucky.

They all knew who’s responsible: the dead left unburied on unhallowed ground, who now walk among the living.

You keep your head down, and pray that they won’t notice your scraped knees and bruised wrist. You’re past your window-climbing days, but what else could you do? The cold sweat that drenched your undergarments, when you saw the babe in your son’s hands washed away your last remnants of hope. You had to fix that, the only way you could, like a burglar in the night.

No mother should be parted from her child.

You know how this ends. Iron spikes through heart, wrists, and feet. Severed head. Fire. Salt on the grave, while a priest recites words of expulsion. Satan, begone!

Not your son. Your son won’t be remembered as a babe-stealing, soulless monster, but as the hero the war made him, before it made him a corpse. And he’ll be buried in hallowed ground, by his father and grandfather. You’ll see to that; there are other ways to release the restless dead. Older ways, whispered from mother to daughter, remembered in lullabies and laments, recited in the clickety-clack of old wives’ knitting. But it has to be done tonight, on Good Friday, when Jesus travels to the Underworld and your son can follow His footsteps. So you don your Easter Sunday clothes, and pin your son’s medals on his chest. If you pinched him, he doesn’t flinch. He doesn’t bleed. But when you retrieve your knitting needles from the top drawer of the armoire, his eyes flicker.

He doesn’t resist when you pull him down and lay his head on your lap. Soft strokes on matted hair, a sob-choked lullaby, a steady pierce through the ear, the shudder of a body long-overdue for rest, and you kiss your son goodnight. 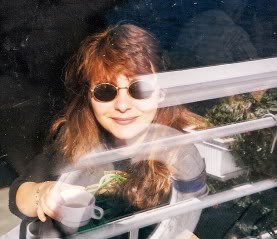 Christine Lucas lives in Greece with her husband and a horde of spoiled animals. A retired Air Force officer and mostly self-taught in English, has had her work appear in several print and online magazines, including Daily Science Fiction, PseudoPod/Artemis Rising 4, and Nature: Futures. She was a finalist for the 2017 WSFA award. In summer 2019, one of her stories will appear in the “Temporarily Deactivated” anthology from Zombies Need Brains. 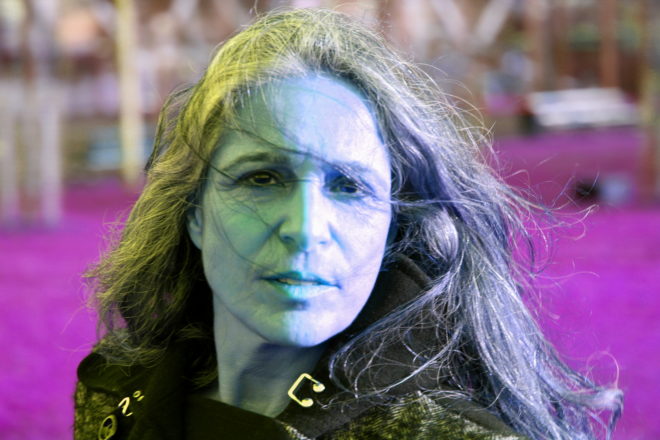