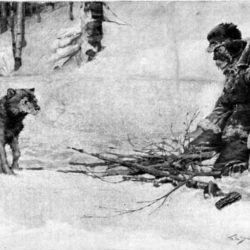 To Build a Fire

He travels fastest who travels alone … but not after the frost has dropped below zero fifty degrees or more.—Yukon Code.

Day had broken cold and gray, exceedingly cold and gray, when the man turned aside from the main Yukon trail and climbed the high earth-bank, where a dim and little-traveled trail led eastward through the fat spruce timberland. It was a steep bank, and he paused for breath at the top, excusing the act to himself by looking at his watch. It was nine o’clock. There was no sun nor hint of sun, though there was not a cloud in the sky. It was a clear day, and yet there seemed an intangible pall over the face of things, a subtle gloom that made the day dark, and that was due to the absence of sun. This fact did not worry the man. He was used to the lack of sun. It had been days since he had seen the sun, and he knew that a few more days must pass before that cheerful orb, due south, would just peep above the sky-line and dip immediately from view. END_OF_DOCUMENT_TOKEN_TO_BE_REPLACED

Links to the books mentioned at the end of the episode:

It is very seldom that one encounters what would appear to be sheer unadulterated evil in a human face; an evil, I mean, active, deliberate, deadly, dangerous. Folly, heedlessness, vanity, pride, craft, meanness, stupidity – yes. But even Iagos in this world are few, and devilry is as rare as witchcraft.

One winter’s evening some little time ago, bound on a visit to a friend in London, I found myself on the platform of one of its many subterranean railway stations. It is an ordeal that one may undergo as seldom as one can. The glare and glitter, the noise, the very air one breathes affect nerves and spirits. One expects vaguely strange meetings in such surroundings. On this occasion, the expectation was justified. The mind is at times more attentive than the eye. Already tired, and troubled with personal cares and problems, which a little wisdom and enterprise should have refused to entertain, I had seated myself on one of the low, wooden benches to the left of the entrance to the platform, when, for no conscious reason, I was prompted to turn my head in the direction of a fellow traveler, seated across the gangway on the fellow to my bench some few yards away.

What was wrong with him?