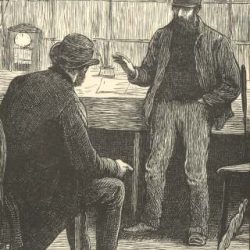 “Is there any path by which I can come down and speak to you?” END_OF_DOCUMENT_TOKEN_TO_BE_REPLACED

It was a battered old book, bound in read buckram. He found it, when he was twelve years old, on an upper shelf in his father’s library; and, against all the rules, he took it to his bedroom to read by candlelight, when the rest of the rambling old Elizabethan house was flooded with darkness. That was how young Mortimer always thought of it. END_OF_DOCUMENT_TOKEN_TO_BE_REPLACED