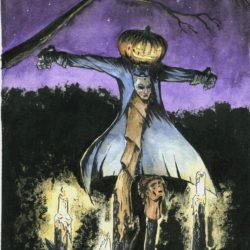 This Flash on the Borderlands is a set of stories by Steve Rasnic Tem, all set on Halloween Street.

“Masks of Me” is narrated by Daniel Braum.

“Tricks” is narrated by Brian Lieberman.

The music accompanying the Halloween Parade is “Creeper” from the album “Necrophiliac Among the Living Dead” by Terrortron, a side project of Anders Manga.