This story was first drafted for a Hallowe’en story contest in the Codex writers group, based on two story seeds provided by Merc Rustad and Stewart C. Baker: “A spider with legs dipped in wax sits atop yards of black lace” and “In the centre of the mansion, there is a room with windows”, respectively. The basic idea was pretty easy given such foundations, and the first draft came out suspiciously easily, but as usually happens with these things I didn’t fully realise what I was writing about until two or three drafts in. As my kids grow up into individuals, with their own challenges and celebrations, I’m increasingly aware of the way I come across as a father, and the ways in which we–I–inevitably repeat the mistakes and successes of our own parents–because what other example do we have to learn from? Some of those lessons are sunk in so deep you don’t even realise they’re there. Though I’m fortunate in never having known the sort of physical or emotional cruelty shown in the story, there are other aspects of who I am and how I react that I struggle to keep in check. It’s worth the effort, though; to be honest, I can’t think of any effort more important. How else will the chain ever be broken?

A Spider Trapped in Wax

Lindom Hall was a cold place; a lonely place; an empty place of stone and echoes. Margaret had her servants, of course, but they hardly counted. She had grown used to the silence, perhaps, but never truly comfortable with it.

Yet now that her son was returned at last to the Hall, she took no solace in the company.

She shook her head as she crossed the entrance hall to him, her cane clicking on the hard wooden floor. “It is not the amount,” she said, brushing an autumn leaf from the felt brim of his hat. “It is that you ask at all.” END_OF_DOCUMENT_TOKEN_TO_BE_REPLACED

“Ten Things I Didn’t Do” is a PseudoPod Original – “This was a story that I struggled with while writing it. I wanted it to have a happier, more heroic ending, but the story refused to bend: it stubbornly held on to its darkness.”

“People Watching” is a PseudoPod original  – “This story is, a little bit, about people who write stories.There’s something predatory about watching people as they go about their day and trying to extract inspiration from them.”

Ten Things I Didn’t Do

I promised you I wouldn’t, so I didn’t. I know you said the words in jest when you dropped me off at school, “Don’t die, honey!”, with that hoarse laugh and sideways wink you do, but I rolled my eyes and said “OK, mom, I promise,” and I don’t break my promises. END_OF_DOCUMENT_TOKEN_TO_BE_REPLACED

“This story showed up nearly fully formed in a dream one night. I probably should have been freaked out by it, but instead I woke up thinking, ‘Ooh, I better get that written down!'”

It was just after sundown when we heard the first voice, a faraway voice, whispery, wheezy, barely distinguishable from the howl of the wind that bore it. “Lessss… innnnn…” was what I heard. Not quite words but near enough that I ran to Mother on the other side of the room.

“Mother, did you-” I began. She silenced me with a raised index finger.

“Yes, I heard it,” she said. Her face was cautious, a look that was not quite fear but concern that soon it would be time for fear. Tomas huddled close to the hem of her skirt, happily pushing a stone around the barnwood floor. “Hush now and listen,” Mother said.

I kneeled beside Mother and we listened. The wind was strong, stronger than I had heard yet this season, screeching across the prairie in a fury that told us snow was imminent. We listened hard, trying to ignore Tomas’s occasional babbles and squeals. After a few moments the voice came again, clearer this time, closer, but still that eerie whisper. “Let… usss… innnnn…” END_OF_DOCUMENT_TOKEN_TO_BE_REPLACED 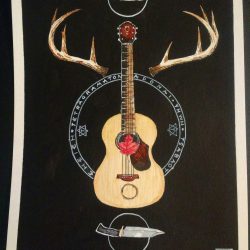 “Worlds End state park is a real, quite pretty, place in Sullivan County Pennsylvania, where I have often had the privilege to stay in a friend’s cabin. I never really thought of how creepy the name was until I began writing this story, but it fit too well to ignore once I thought of it.

I usually do ignore Halloween these days, at least in terms of the candy and costumes celebration, but I’m always attracted to the idea of a liminal space, a time when living and dead, seen and unseen draw closer together, and things cross over that cannot at other times.”

Farewell Concert at the World’s End

On October 30th, 1968, Luther killed a pair of wannabes a little way behind a roadhouse in southern Virginia. He’d smelled the power on them while they played with a pickup band for tips from truckers taking a late lunch. A scent like sage and engine grease cut through the rockabilly trash and the tortured picking that chased chords from chart-toppers that never should have been attempted on that battered, out of tune guitar. They hadn’t looked like much, the pair of thickset men with matching dirty-blonde mustaches and weathered jeans, but the scent was unmistakable for an Enthusiast like Luther. He’d thought of stepping up to play himself, hooking them that way, but his guitar was out in the lot, in the last car he’d stolen, and he had sudden flashes of the last time he’d played without it, the booing laughs and the bottles when he stayed and tried to save the set. END_OF_DOCUMENT_TOKEN_TO_BE_REPLACED

Jamie had been visiting the thing that lived in the culvert for about three weeks now. He spent more time with it than he ever had with anyone his own age, or even anyone outside of immediate family members. Jaime was a curious child, but not particularly social. Friendships existed in the abstract. The companionship of even a strange culvert-dwelling thing was not easily cast aside. END_OF_DOCUMENT_TOKEN_TO_BE_REPLACED

FEINSTEIN: How did you decide to come forward?

FORD: Ultimately because reporters were sitting outside my home and trying to talk to my dog through the window to calm the dog down, and a reporter appeared in my graduate classroom and I mistook her for a student, and she came up to ask me a question, and I thought she was a student and it turned out that she was a reporter.

So at that point, I felt like enough was enough. People were calling my colleagues at Stanford and leaving messages on their voicemails and on their e-mail, saying that they knew my name. Clearly, people knew my address because they were out in front of my house.

She was living in squalor. At least, that’s what her friends had said and now she never saw them anymore. Their looks of disapproval with undertones of disgust were displaced, undeserved. It was bullshit.

She’d let some things go. Her apartment certainly needed a clearing of clutter and a good bleaching to get rid of the smell. Empty boxes and rancid food containers piled up along each wall. She couldn’t remember the last time she had taken out the garbage. She couldn’t be bothered. The place had been a shit-hole long before she’d signed the lease.

The pale blue glow of her computer screen was the only source of light. Her shuttered windows covered by thick black curtains blocked out the rest of the world. Her time was consumed with packages. So many packages. All she had to do was point, click, and they’d be taken away.

This had all started with her panties. A friend had once mentioned that she knew of girls that sold theirs for serious money. The idea was so absurd and degrading that they’d just laughed it off. Later her curiosity got the best of her and she searched online. Turns out lots of women did this and they were making serious money indeed.

END_OF_DOCUMENT_TOKEN_TO_BE_REPLACED

This episode is brought to you by The Darkest Night podcast. Follow them on Twitter and add them to your feed at http://www.darkestnightpod.com/ 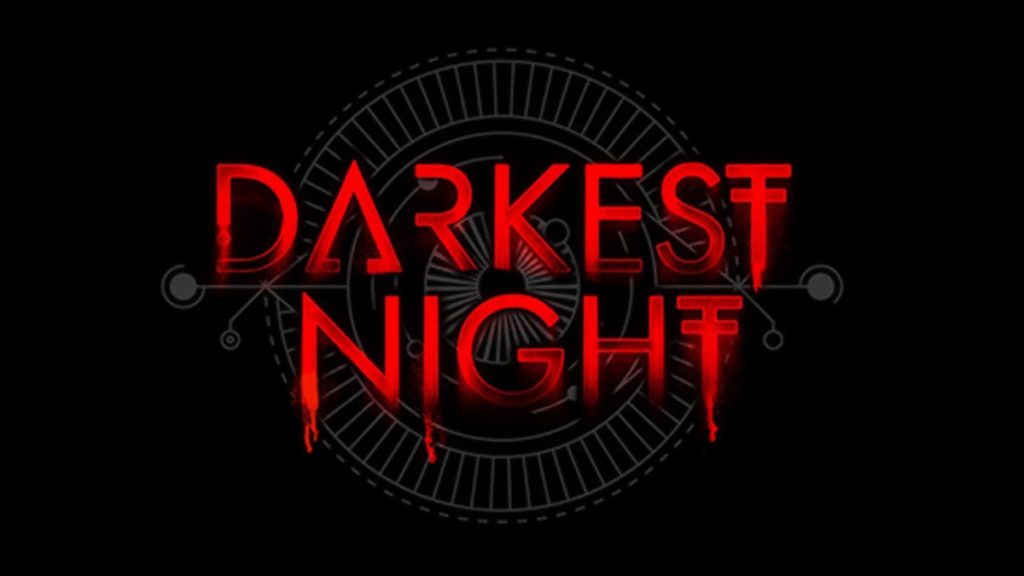 By the time she’s thrown herself upright and grasped for the remote with shaking hands, it’s too late. She’s seen it. She’s heard the words. Instead, she stumbles for the kitchen sink, feeling her throat clench with acrid, stinging horror. The vibrant green and brown hues of the nature documentary wash the inside of her darkened apartment, sonorous tones of the narration hanging in the air. She tries not to listen as she hunches over the filthy, dish-choked sink, retching and gasping for air, but the words still come. Thorns. Impale. Butcher.

Coupled with ambien and supermarket gin, the nature documentaries had been the only thing that helped her fall asleep for the last month, but that’s over now. Ruined in a single fusillade of frames and words. She shuts her eyes tight, presses her face to the cracked tile of the kitchen counter as sobs rock her wasting frame. Behind her eyelids, she sees what she always sees. Trinity on the spike, wide and terrified eyes going glassy with blood loss as her little mouth struggles and fails to form a plea for help. But now the jagged spar of rusted iron in the little girl’s throat has a name, christened by the late night documentary on the cruel hunting habits of predatory birds.

Shrike. It repeats in her ears, a ringing bell striking midnight. Shrike. In the cold clarity of the moment, she feels a silver thread of relief. She knows the name of the thing, now. It is no longer just a factor, one link in the chain of her fatal, unforgivable mistake. The Shrike is an entity. It is something outside herself she can blame. Something she can hate. END_OF_DOCUMENT_TOKEN_TO_BE_REPLACED 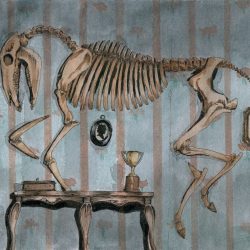 We go to Grandmère’s house to ride the unicorns.

We only go once or twice a year, and it’s never enough. Riding the unicorns is the most fun a person could have, and I don’t know why we can’t do it every day. Mom never gives us a good reason. It’s not like ice cream, where it’ll give you a stomachache if you have too much. You could ride the unicorns for hours and hours. They never get tired. They prance and they fly a little, just a foot or two, and they’re blue and pink and green and purple, and their horns shine in the sun like candy canes, like candy canes after you’ve licked off all the red and made them white and sharp with your tongue.

Grandmère watches us from the veranda as we ride. She never touches the unicorns herself. They’re here for us. They’re here because she loves us, and she wants us to have fun. She watches, and sometimes she waves with her hand cupped like she’s a queen, the big diamonds on her necklace sparkling across the lawn, and Robin and I go around and around until we’re dizzy and Mom yells at tell us it’s time to go home. END_OF_DOCUMENT_TOKEN_TO_BE_REPLACED