Into the Penny Arcade

She walked down the same street every day on her way home from school. There were no houses along there, just old warehouses with boarded-up windows and rubbish-plugged holes. Red brick dust crumbled from the walls and made patterns on the pavement. Greyish-green moss grew in all the cracks.

The lorry hadn’t ever been there before. It was dark blue with no writing on the side. She crossed away from it, walked faster. Her rucksack dug into her right shoulder, textbooks bounced against her spine, her heels snapped on the pavement. There were no other sounds. The street was like a tunnel; the wind sucked her along it.

She emerged into the real world at the other end: cars bombing past, chip shop smell, a mum with a buggy yelling at a kid who was lagging behind.

The lorry was there again the next day. She crossed over. There were girls who got snatched. Men who did things to girls. It would be dark inside that lorry. Was it always going to be there now? Had it moved during the day whilst she was at school, or at night after she’d passed it? And then come back. 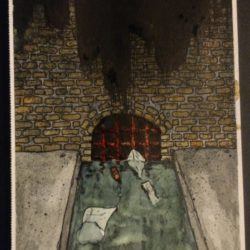 Links to the books mentioned at the end of the episode:

It is very seldom that one encounters what would appear to be sheer unadulterated evil in a human face; an evil, I mean, active, deliberate, deadly, dangerous. Folly, heedlessness, vanity, pride, craft, meanness, stupidity – yes. But even Iagos in this world are few, and devilry is as rare as witchcraft.

One winter’s evening some little time ago, bound on a visit to a friend in London, I found myself on the platform of one of its many subterranean railway stations. It is an ordeal that one may undergo as seldom as one can. The glare and glitter, the noise, the very air one breathes affect nerves and spirits. One expects vaguely strange meetings in such surroundings. On this occasion, the expectation was justified. The mind is at times more attentive than the eye. Already tired, and troubled with personal cares and problems, which a little wisdom and enterprise should have refused to entertain, I had seated myself on one of the low, wooden benches to the left of the entrance to the platform, when, for no conscious reason, I was prompted to turn my head in the direction of a fellow traveler, seated across the gangway on the fellow to my bench some few yards away.

What was wrong with him?