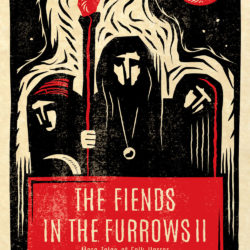 Reviews by Christi Nogle and read by Kat Day for The Fiends in the Furrows 2: More Tales of Folk Horror edited by David T. Neal and Christine M. Scott and the Gordon B. White collection As Summer’s Mask Slips and Other Distruptions.

Campbell’s dad watched him from beyond the cordon, through the gap between catering vans. Reluctantly, Campbell raised his hand – a motionless salute rather than a wave – but his dad’s eyes continued to scan from side to side.

Campbell jammed his hands in the pockets of the padded gilet he had been forced to wear. He surveyed the collection of makeshift tents. Their interiors glowed red with light from large electric bar heaters.

“Excuse me,” he said to a middle-aged woman hurrying in the other direction, “do you know where Laine is?”

“Kid, I don’t know where anyone is.” The woman brandished a folded sheet of paper. “But if I don’t get these new lines to Kier’s trailer in the next few minutes then I’ll be taking a turn up there myself.” She nodded at the two metal cages that hung from the tree at the foot of the hill. They were the shapes of birdcages but each big enough to hold a person. A stepladder had been placed below one of them and a man in a day-glo tabard was testing the metal bars of the cage. END_OF_DOCUMENT_TOKEN_TO_BE_REPLACED