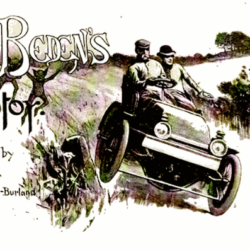 Preorder Monster She Wrote: The Women Who Pioneered Horror and Speculative Fiction by Lisa Kroger and Melanie R. Anderson. Then listen to them at the Know Fear Cast.

A hard man was Ralph Strang, seventh Earl of Beden, seventy years of age on his last birthday, but still upright as a dart, with hair white as snow, but with the devilry of youth still sparkling in his keen dark eyes. He was, indeed, able to follow the hounds with the best of us, and there were few men, even among the youngest and most hot-headed of our riders, who cared to follow him over all the jumps he put his horse at.

When I first came to Upstanway as a doctor I thought it strange that so good a sportsman should be so unpopular. As a rule a man can do pretty well anything in a sporting county so long as he rides straight to hounds. But before I had been in the place a month I attended him after a fall in the hunting-field, and I saw that a man like that would be unpopular even if he gave all his goods to the poor and lived the life of St. Francis of Assisi. Not that he was harsh or even unpleasant, but he had the knack of making one feel foolish and uncomfortable, and there was something in the expression of his eyes that made one unable to look him squarely in the face. His manners, indeed, were perfect, and he retained all the old-world courtliness which seems to have been permanently abandoned by this generation, but I could not help feeling that underneath all his politeness and even hospitality lay a solid substratum of contempt.

It was doubtless this impression which had earned him his unpopularity, for I never heard a single one of his enemies lay anything definite to his charge beyond the fact that his elder brother had died in a lunatic asylum, and that Lord Beden was in some vague way held responsible for this unfortunate event.

But it was not until Lord Beden purchased a 12-h.p. “Napier” motor-car that the villagers really began to consider him possessed of a devil. And certainly his spirit of devilry seemed to have found a worthy plaything in that grey mass of snorting machinery, which went through the lanes like a whirlwind, enveloped in a cloud of dust, and scattering every living thing close back against the hedges as a steamer dashes the waves against the banks of a river. I had often heard people whisper that he bore a charmed life in the hunting-field, and that another and better man would have been killed years ago; and he certainly carried the same spirit of dash and foolhardiness, and also the same good fortune, into a still more dangerous pursuit. END_OF_DOCUMENT_TOKEN_TO_BE_REPLACED