This episode is dedicated to horror hosts in general, and Sinister Seymour in particular. 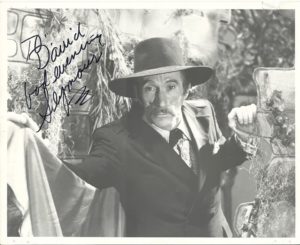 The room had been cleaned with pine oil disinfectant and smelled like a public toilet. Harry Spinner was on the floor behind the bed, scrunched down between it and the wall. The almost colorless chenille bedspread had been pulled askew exposing part of the clean, but dingy, sheet. All I could see of Harry was one leg poking over the edge of the bed . He wasn’t wearing a shoe, only a faded brown and tan argyle sock with a hole in it. The sock, long bereft of any elasticity , was crumpled around his thin rusty ankle.

I closed the door quietly behind me and walked around the end of the bed so I could see all of him . He was huddled on his back with his elbows propped up by the wall and the bed. His throat had been cut. The blood hadn’t spread very far. Most of it had been soaked up by the threadbare carpet under the bed . I looked around the grubby little room but didn’t find anything. There were no signs of a struggle, no signs of forced entry-but then, my BankAmericard hadn’t left any signs either. The window was open, letting in the muffled roar of traffic on the Boulevard. I stuck my head out and looked , but it was three stories straight down to the neon-lit marquee of the movie house.

It had been nearly two hours since Harry called me. “Bertram, my boy, I’ve run across something very peculiar. I don’t really know what to make of it.”

For the rest of the text of this story, get thee to the closest used book store and pick up a copy of San Diego Lightfoot Sue and Other Stories.

One of genre fiction’s best kept secrets is Tom Reamy. He was nominated for the Hugo four times, won the Nebula, and won the John W. Campbell Award for best new writer. He was one of the founders of the Turkey City Writer’s Workshop. He was loved by his peers and considered an heir to Bradbury’s weird fiction tradition. Then he tragically passed away seven pages into his second novel. A shining star was darkened that day, and I can only imagine what great works we could have seen. Now his fiction is primarily out of print and you have to dig into the dark corners of your used book store to find copies of his work. We dug deep and hope you seek out more of his work after this.

Andrew is one of the founders and proprietors of the H. P. Lovecraft Historical Society, and has produced and appeared in films, radio dramas, games, music and audiobook projects based on or inspired by Lovecraft’s work, most notably the motion picture of “The Call of Cthulhu” and the Dark Adventure Radio Theatre series. He is an occasional guest reader on The H.P. Lovecraft Literary Podcast and is the co-host of the podcast “Voluminous: The Letters of H.P. Lovecraft.”