“Killer” is the second sequence of “The Murderer Cycle,” a loosely connected set of stories written to deconstruct the near-mythic portrayal of killers in modern horror. This is Sean Ganus’s first professional sale.

There’s a killer in my kitchen. I don’t know how long he’s been here, sitting in the dark. I didn’t notice him until I was already six steps inside, obliviously hitting the light and grabbing a pear from the basket by the stove. He’s sitting at the little wooden table I keep by the window. He looks like he’s waiting for dinner. His elbows hang over the edge and his hands rest on top of each other. One hand clenches the handle of a machete. The tool sports a fresh, gleaming edge. It was sharpened with obvious care. It’s wet and glistening in the fluorescent light.

He’s massive, so unbelievably *big*. He’s a heavy chunk of muscle and bone, tied off in a mechanic’s jumpsuit. Clumps of drying mud peel from his boots.

I know him. I mean…I know who he is. Velstrom. Robert Velstrom. Robby’s been dead and buried for thirteen years, but he’s sitting here now. 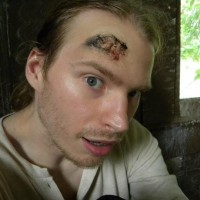 Sean Ganus lives and work in Macon, Georgia. He’s a struggling writer and graduate student, currently working on his Master’s in School Psychology, though with any luck he’ll have wrapped that up by the time this story is released. He passes the time by working in a coffee shop. He’s previously written book reviews for the UK-based Horrifically Horrifying Horror Blog, and he’s tremendously thankful to its founder Emma Audsley for giving him the opportunity to be a part of her amazing website. His only other published (or, rather, produced) work is the short story “Write Away,” featured on the October 24, 2014 episode of “Tales to Terrify.” He posts original writings on his blog, “Writing Myself Into a Hole,” at seanganus.wordpress.com, and run ongoing horror serials from his Twitter handle, @TweetTheHorror. He’s in the process of revising his first novel, and a small film company he runs with a close friend has just finished production on two independent horror films: “The Last Haunted House” and “The Rabbits.” 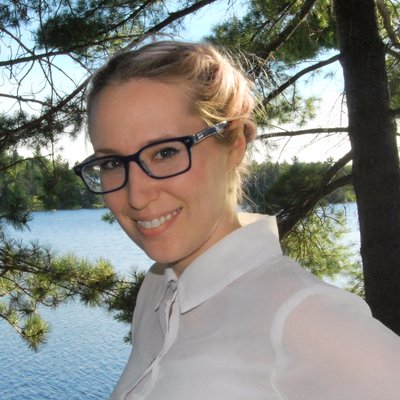 Jen Albert is an entomologist, writer, editor, narrator, game-player, cosplayer, streamer, reader of All The Things, and haver of far too many hobbies.

Jen somehow became co-editor of her favorite fantasy fiction podcast; she now wonders if she’s still allowed to call it her favorite. She works full-time as an editor at Toronto-based publisher ECW Press.