“I suppose that I want people to think about the intersection of honing a craft, and obsession as well as mentorship.”

As a commis I worked under the rest of the Chefs de Partie. The first two months were a slog of relentless hazing and trouble. I never flinched, just kept moving forward. I knew I was the lowest man on the totem pole and I’d simply have to wait out the abuse.

In my sixth month when Chef first asked me to keep his knives sharp I was taken aback. I didn’t even know that he knew my name. He’d certainly never spoken directly to me before. Chef Catalan never let anyone even touch his knives, but to trust some aspect of their care to a mere commise… It was unusual to say the least.

The hazing stopped, but now I was only spoken to in a professional capacity. I became an automaton to them, a tool, no more worth socializing with than a ladle or a whisk. I never let any emotion show as a rule, but I certainly never showed them how much their silence pleased me. The more I could streamline my existence. The more I could eliminate every superfluous thing, person, and interaction, the more I could dedicate myself to my craft. It only took two weeks to get the knives as he wanted, or at least get past the point of a daily critique of my sharpening technique. When dealing with Chef Catalan, two weeks to anything resembling pleasure is a triumph. 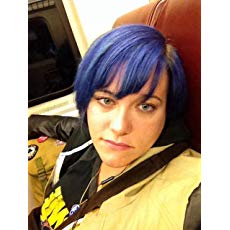 CHRISTA PAGLIEI lives in Brooklyn, New York where she writes and works in Television as a Producer’s assistant. Her work has appeared in Fictionvale, Strangelet Journal, InstaGatorZine, and more. When she’s not working she enjoys riding her bicycle, listening to Rock N’ Roll, haunting Flea Markets, and anything that’s a little creepy. Her first feature film Now/Here, on which she was was a co-screenwriter and producer, is set to premier at festivals this year. You can follow her on her webpage: ChristaPagliei.