In retrospect none of us could say with any precision when it began. Condon had never been part of our set. Grandfathered into the club by one of those old robber barons whose fortunes had declined, he was essentially nondescript—capable of maintaining a decent conversation, pleasant enough to be around, but not the kind of man with whom one formed deep and lasting relationships.

When we met him, we were friendly. When we didn’t — which was the norm, Condon not being ubiquitous in our circles — we didn’t think of him at all. So it was hard to say, as we thought the thing through among ourselves, when precisely it had begun — a task complicated by the fact that none of us had known anything had begun, until it was over. 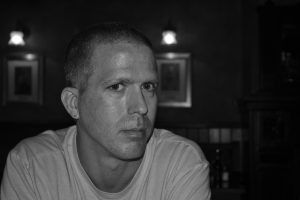 Dale Bailey lives in North Carolina with his family, and has published three novels, The Fallen, House of Bones, and Sleeping Policemen (with Jack Slay, Jr.). His short fiction, collected in The Resurrection Man’s Legacy and Other Stories, has been a three-time finalist for the International Horror Guild Award, a two-time finalist for the Nebula Award, and a finalist for the Shirley Jackson Award and the Bram Stoker Award. His International Horror Guild Award-winning novelette “Death and Suffrage” was adapted by director Joe Dante as part of Showtime Television’s anthology series, Masters of Horror. His collection, The End of the End of Everything: Stories, will be out now, with a novel, The Subterranean Season, as well.