An architect was engaged and there needed only a decision to be made over the location of the chapel. The obvious place was an area closest to the crossing and facing east. This would’ entail the partial destruction of the eastern wall of the north transept, an exercise which would require the relocation of a number of funereal plaques and stones, the most significant of which was a sixteenth century memorial to a Canon of Morchester Cathedral, one Jeremiah Staveley. It was quite an elaborate affair in polished black basalt about seven foot in height overall, set into the wall some three feet above the ground. It consisted in a slab topped with scrollwork, crudely classical in feel with a niche in which was set a printed alabaster image of the Canon, standing upright in his clerical robes with his arms crossed over his chest. The figure was tall and narrow, the bearded face gaunt: a somewhat disconcerting image which looked as if it portrayed the corpse rather than the living being. Beneath this on the polished slab an inscription had been incised, the lettering picked out in white. It read:

It was followed by these verses in bold capital letters:

BEHINDE THESE SACRED STONES IN DEATH STAND I

ENTOMBED UPRIGHT THUS WHERE I SHOULDE SLEEPE
WHEN DEAD RISE UP I’LL READYE BE IN PLACE
TO MEET MY JUDGE AND MAKER FACE TO FACE
STRANGER, REST NOT MY CORSE UNTIL THAT DAYE

LEST I TORMENT THEE WITH MY SORE DISMAYE

The implication of these lines, that the body of Canon Staveley was actually entombed behind the slab, was borne out by the cathedral records and one of the old vergers whose family had been connected with the cathedral since time immemorial. Dean Coombe was disposed to be rather benevolent towards this worthy whose name was Wilby. The man was a repository of cathedral history and lore and the Dean was content to listen politely to Wilby’s ramblings, but he did not expect his condescension to be rewarded by opposition to his plans.

‘Mr Dean,’ said Wilby one afternoon, as they stood before the memorial in the north transept. ‘You don’t want to go a moving of that there stone, begging your pardon, sir.’

‘Don’t it say so plain as brass on that there ‘scription? ‘Tis ill luck to move the bones of the wicked. So said my granfer, and his before him.’ 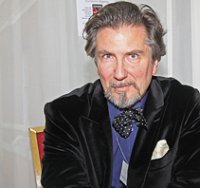 REGGIE OLIVER is an actor playwright and theater director, as well as being the author of two novels, a biography and six volumes of “strange” stories, of which the latest is FLOWERS OF THE SEA. His fifth collection, MRS. MIDNIGHT, won the Children of the Night Award 2012 for “best work of supernatural fiction”. Four of Reggie’s collections, all illustrated by the him, are available from Tartarus Press.

David Moore is an American role-player, podcaster, and all around good guy. He hosts The Game Master Show and organized the Firefly RPG After Serenity.