by Robert A. Arthur, Jr.

‘Good morning, Sir Andrew,’ Jorman said pleasantly as the steps came up to his stand. ‘Times?’

‘Thanks.’ It was a typically British voice that answered. ‘Know me, do you?’

‘Oh, yes.’ Jorman grinned. It was usually a source of mystification to his customers that he knew their names. But names were not too hard to learn, if the owners of them lived or worked nearby. ‘A bellboy from your hotel was buying a paper last time you stopped. When you’d gone on, he told me who you were.’

‘That easy, eh?’ Sir Andrew Carraden exclaimed. ‘Don’t know as I like it so much, though, being kept track of. Prefer to lose myself these days. Had enough of notoriety in the past.’

‘Had plenty of it four years ago, I suppose,’ Jorman suggested. ‘I followed the newspaper accounts of your tomb-hunting expedition. Interesting work, archaeology. Always wished I could poke around in the past that way, sometime.’

‘Don’t!’ The word was sharp. ‘Take my advice and stay snug and cozy in the present. The past is an uncomfortable place. Sometimes you peer into it and then spend the rest of your life trying to get away from it.’ 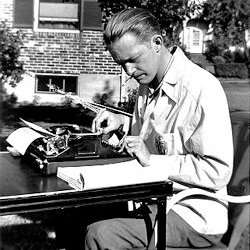 ROBERT A. ARTHUR, JR. (1909-1969) was born in 1909 at Fort Mills, Corregidor Island, Phillipines and passed away in 1969 in Philadelphia, PA. During his very productive life he was offered scholarships to both West Point and Annapolis, but turned them down to become a writer, his first works appearing in almost all of the pulp magazines being published at the time including “Black Mask” and “The Shadow”. He then moved on to radio scripting with David Kogan and wrote over 500 shows, including creating the program THE MYSTERIOUS TRAVELER, all while continuing to write short fiction. He wrote for THE TWILIGHT ZONE and was script editor for ALFRED HITCHCOCK PRESENTS, later becoming the editor of the Alfred Hitchcock paperback series (both the adult and children’s lines). From 1964-1968 he wrote the first ten of the ALFRED HITCHCOCK & THE THREE INVESTIGATORS books about the adventures of a trio of intrepid mystery solvers – a series still popular worldwide. THE THREE INVESTIGATORS series was one of the seminal youthful reading experiences of your editor, Shawn Garrett, who will eternally thank Mr. Arthur for the creation of Jupiter Jones, Pete Crenshaw, Bob Andrews and all the residents of Rocky Beach, California and who is extremely proud to be able to present this story to you through the auspices of Mr. Arthur’s daughter, Elizabeth Arthur, who followed in the footsteps of her father and is an author herself.