These three — the old physicist, the girl, and the young Anglican parson who was engaged to her — stood by the window of the country house. The blinds were not yet drawn. They could see the dark clump of pines in the field, with crests silhouetted against the pale wintry sky of the February afternoon. Snow, freshly fallen, lay upon lawn and hill. A big moon was already lighting up.

‘Yes, that’s the wood,’ the old man said, ‘and it was this very day fifty years ago — February 13 — the man disappeared from its shadows; swept in this extraordinary, incredible fashion into invisibility — into some other place. Can you wonder the grove is haunted?’ A strange impressiveness of manner belied the laugh following the words.

‘Oh, please tell us,’ the girl whispered; ‘we’re all alone now.’ Curiosity triumphed, yet a vague alarm betrayed itself in the questioning glance she cast for protection at her younger companion, whose fine face, on the other hand, wore an expression that was grave and singularly rapt. He was listening keenly.

‘As though Nature,’ the physicist went on, half to himself, ‘here and there concealed vacuums, gaps, holes in space (his mind was always speculative; more than speculative, some said), through which a man might drop into invisibility — a new direction, in fact, at right angles to the three known ones — higher space, as Bolyai, Gauss, and Hinton might call it; and what you, with your mystical turn’ — looking toward the young priest — ‘might consider a spiritual change of condition, into a region where space and time do not exist, and where all dimensions are possible — because they are one.”

The Terror Of The Twins

That the man’s hopes had built upon a son to inherit his name and estates — a single son, that is — was to be expected; but no one could have foreseen the depth and bitterness of his disappointment, the cold, implacable fury, when there arrived instead — twins. For, though the elder legally must inherit, that other ran him so deadly close. A daughter would have been a more reasonable defeat. But twins — ! To miss his dream by so feeble a device — !

The complete frustration of a hope deeply cherished for years may easily result in strange fevers of the soul, but the violence of the father’s hatred, existing as it did side by side with a love he could not deny, was something to set psychologists thinking. More than unnatural, it was positively uncanny. Being a man of rigid self-control, however, it operated inwardly, and doubtless along some morbid line of weakness little suspected even by those nearest to him, preying upon his thought to such dreadful extent that finally the mind gave way. The suppressed rage and bitterness deprived him, so the family decided, of his reason, and he spent the last years of his life under restraint. He was possessed naturally of immense forces — of will, feeling, desire; his dynamic value truly tremendous, driving through life like a great engine; and the intensity of this concentrated and buried hatred was guessed by few. The twins themselves, however, knew it. They divined it, at least, for it operated ceaselessly against them side by side with the genuine soft love that occasionally sweetened it, to their great perplexity. They spoke of it only to each other, though.

‘At twenty-one,’ Edward, the elder, would remark sometimes, unhappily, ‘we shall know more.’ ‘Too much,’ Ernest would reply, with a rush of unreasoning terror the thought never failed to evoke — in him. ‘Things father said always happened — in life.’ And they paled perceptibly. For the hatred, thus compressed into a veritable bomb of psychic energy, had found at the last a singular expression in the cry of the father’s distraught mind. 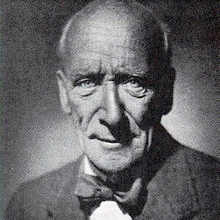 ALGERNON HENRY BLACKWOOD, CBE (1869–1951) was an English short story writer and novelist, one of the most prolific writers of ghost stories in the history of the genre. He was also a journalist and a broadcasting narrator. He was born in Shooter’s Hill, Kent, England and, after schooling in Europe, Blackwood’s father sent him to Canada in 1887 on business. END_OF_DOCUMENT_TOKEN_TO_BE_REPLACED