“Cry Room” was inspired by events that occurred a few years back. The line between fiction and reality is probably not where you’d expect.

Around him, ladies fanned themselves in the heat, dressed in their Sunday finest. At the front of the church, the minister began. He was an older gentleman, narrow and angular as the church itself. Somewhere up ahead, among the sea of blue hair and balding pates sat his cousin Jason—along with Jason’s wife, her grandparents, and other assorted relation, both close and distant, all here for the special occasion.

Mitch came from Steel people, north counties, Hammond and East Chicago. But these were rural people down here. Farm people. His cousin’s wife’s side. In Indiana, an hour south might have been another world.

His daughter was good for the first minutes of the minister’s sermon. Then it began: she slid down his knee to the floor. 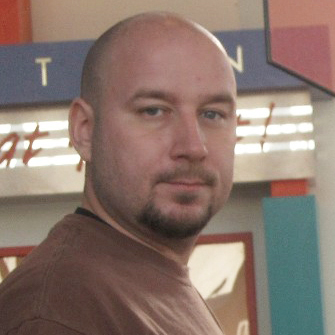 Ted Kosmatka is an American writer. His short fiction has been nominated for both the Nebula Award and the Theodore Sturgeon Memorial Award. As a video game writer at Valve, he was one of the primary writers of Dota 2 lore. He is no longer at Valve and is working on other projects.

Kosmatka’s work has been reprinted in nine Year’s Best anthologies and translated into a dozen languages. His scripts have been performed on stage in Indiana and New York. He is co-winner of the 2010 Asimov’s Readers’ Choice Award. His novel The Games was nominated for a Locus Award for Best First Novel. Ted’s latest novel, The Flicker Men, was nominated in 2017 for the Sakura Award in Japan.

Peter Piazza – is your reader this week. Pete narrates stories for sites including StarshipSofa and Tales of Old (as well as Pseudopod, of course).