The man with the dog collar came the other night, standing sweating at the door, thin black hair plastered across his head. Me Mam has dog collars, but he brought his own. He always does. It was too late to go out, not that me Mam would’ve minded, but the streets aren’t safe when it’s dark near our place. So I had to watch.

Me Da wasn’t home. He never is. Or when he is, they fight, the stink of the booze hanging heavy in our two-roomed house.

He stayed for maybe an hour, the man with the dog collar. I watched as he sweated and strained, me Mam’s spiked heel pressed hard against his back, the black leather around his neck cinched tight, stained blacker where the sweat runnelled down from the back of his greasy head. Me Mam caught me looking once or twice and waved my looks away. So I watched the wall instead, pretending to read the old newsprint behind the places where the wallpaper peeled. I asked her once why she did it, but she called me a brat and a stupid little bitch and told me to shut up.

“How else we going to live?” she said.

Jay Caselberg is an Australian science fiction writer. He has also used the name ‘James Hartley’ for some of his short fiction. His four novels to date are the Jack Stein series, comprising Wyrmhole, Metal Sky, The Star Tablet and Wall of Mirrors, published 2003-2006 by Roc Books. Subsequent works appeared mostly in the small press comprising “Empties”, “The Jackal Dreaming” as J.A Caselberg, “The Memory Box” and “Breath” as Jackson Creed. His short fiction continues to appear in many anthologies and magazines. 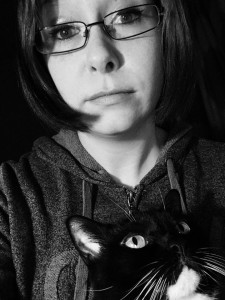 Jen Williams lives in London with her partner and their cat. A fan of pirates and dragons from an early age, these days she writes character-driven sword and sorcery novels with plenty of banter and magic, and in 2015 she was nominated for Best Newcomer in the British Fantasy Awards. The Copper Cat trilogy consists of The Copper Promise, The Iron Ghost and The Silver Tide – all published by Headline in the UK – and the first two books in the trilogy are now available in the US and Canada, published by Angry Robot. Both The Iron Ghost and The Silver Tide have been nominated for British Fantasy Awards, and she is also partly responsible for Super Relaxed Fantasy Club. The Ninth Rain, the first book in the Winnowing Flame trilogy, was published by Headline in February 2017, and she is partial to mead, if you’re buying.

The cat’s name is Pyra.