We’d reached the de-icing station, and I pushed on the brakes and brought the coasting plane to a rolling stop. No matter how many times I did this, I was always surprised by the dark out here. At every other point within two miles of this tiny airport, manmade light flooded and mapped the world. But not here.

I peered through the windscreen and the wavering skeins of snow. It took a few moments, but eventually, my eyes adjusted to the point where I could just make out the de-icer truck parked a few meters off the taxiway in the flat, dead grass. Weirdly, it had its boom already hoisted, as though we were meant to make our way into the fields to get sprayed. I couldn’t see either the driver of the truck or the guy on the enclosed platform at the top of the boom, because both were blanketed in shadow. 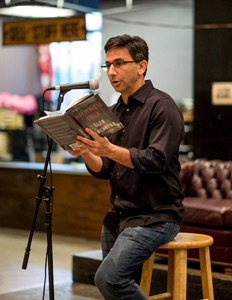 orn to parents Linda Hirshberg (psychologist) and Jerry Hirshberg (painter, founder of Nissan Design International, and author of The Creative Priority), Hirshberg began telling stories at the age of three. “My mother was a psychologist, my father a designer and painter, and I think their influence still resonates through everything I write. I can’t draw a straight line, but I love painting with the language, and what interests me most in stories, even the spooky ones, is the way people respond to and discover one another as their lives unfold or unravel.”