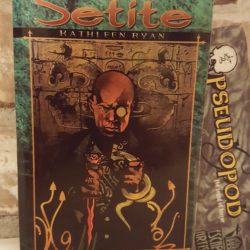 Clan Novel: Setite covers events that happen between June 21 and July 31, 1999. It is Book 4 in the original clan novel saga (but third chronologically that ties up its events) and was published in July 1999. It was written by Kathleen Ryan, who also wrote the Ravnos book.

While this novel interacts with the events of the previous books, it practically stands alone. It is structured in three acts and follows a cohesive plot. The events in this book do not rely on knowing the events happening elsewhere in the world, yet they still build on them. Hesha seems unperturbed by most of the upheaval in the vampire world in the eastern United States. The events are inconveniences that require adjustments, but there are no major changes to what he does. END_OF_DOCUMENT_TOKEN_TO_BE_REPLACED 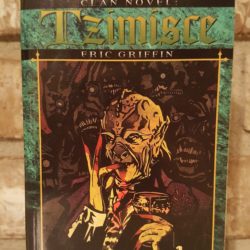 Clan Novel: Tzimisce covers events that happen on and around the attack on Atlanta on the evenings of June 19 through July 7, 1999. I read Part 1: The War Council (6/19-21) before the TOREADOR book, the Part 2: The Firedance (6/22) and Part 3: The Deception (6/22-7/2) after TOREADOR. After TZIMISCE, I went to Part 1 of SETITE. TZIMISCE is Book 2 in the original clan novel saga and was published in May 1999. It was written by Eric Griffin, who also wrote the Tremere novel.

Let’s take a moment to appreciate the lush cover art. The vampire depicted is monstrous in countenance and action, enjoying a meal in debauched hedonism. Surrounding the primary figure are leering faces born of nightmare with just enough detail to suggest the worst in the shadows. END_OF_DOCUMENT_TOKEN_TO_BE_REPLACED 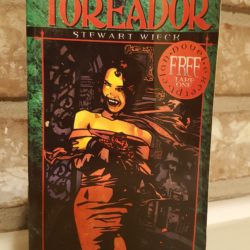 Clan Novel: Toreador covers events that happen on and around the attack on Atlanta on the evenings of June 20-22, 1999. It is Book 1 in the original clan novel saga, and was published in February 1999. It was written by Stewart Wieck, who also wrote the Malkavian novel (please let that one be stronger).

This story is divided into three parts. Part 1: Leopold primarily follows a very young Toreador vampire, and events related to the planning of a big Summer Solstice party at the High Museum of Art in Atlanta. Part 2: Victoria spends more time with the leading Toreador vampire in the city, and the early political machinations of this Summer Solstice party. Part 3: The Eye focuses on the unfriendly Sabbat vampires attacking the party, along with a subplot related to an artifact of great power, The Eye of Hazimel.

I started my read-through with the first section of the Nosferatu book, followed by the first section of the Tzimisce book, which brought me to the Toreador novel. There must have been something in the water in 1999. Because clearly what we wanted in a Star Wars film that opens a multi-part epic was a plotline about trade negotiations. Just like the opener to a Vampire series about the end of the world should be about party preparation and existential ennui. Practically nothing happens until section 3. It’s good that I didn’t start here, because Leopold is more annoying than peak whining-Louis. I know that he is the neonate vampire mechanism for us to be introduced to the World of Darkness, but if I started here, I would not have the fortitude to continue. I cannot wait until the soft and squishy angsty vampire Leopold dies horrifically. Please let it be sooner rather than later. END_OF_DOCUMENT_TOKEN_TO_BE_REPLACED 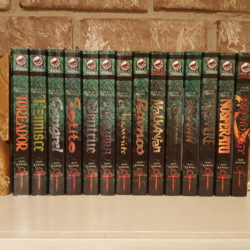 In 1999, White Wolf embarked on their most ambitious fiction project to tie in to their Vampire: the Masquerade game line. Over the course of a year, they released thirteen novels – each focusing on a different clan – that presented the events of a major war between the two primary vampire factions. The events coincided with the awakening of a great old vampire, for whom the stars had aligned. These 13 books in the Clan Novel Saga were followed by an anthology to help tie up some loose ends. All of this was repackaged in 2003 as a set of four chunkier books that followed the events in chronological order. END_OF_DOCUMENT_TOKEN_TO_BE_REPLACED