“I’m Canadian and winters can be long and rough up here, and that was sort of the inspiration for this story. It wasn’t uncommon for people in rural areas not all that long ago to get horribly lost during a whiteout (a heavy and unrelenting snowstorm). People would leave their home to get something in their barn, and they’d be found a few days later in a pile of snow because they couldn’t find their way back. I always thought it was a terrifying idea, and I really hope the listeners at home think so too!”

Jean pulls a pine needle from inside his coat pocket and slowly begins to gnaw on it. “It’s better than dying lost in a forest, or being eaten by starving wolves.”

“I’d welcome the wolves, Jean. At least then I’d have a chance to bite some meat off one of them, and die with a full stomach. Besides, the dogs had enough brains to get out of here a long while ago.”

“There’s still some. How else do you account for the howling outside our cabin all night?”

“The wind,” he shoots back dismissively.

“Or a wendigo,” Jean says quietly, in a voice a whisper.

“Wendigos. Mom used to tell me stories of how your father’s ancestors lived in these woods during the time of them. She said to me her, your, great grandfather was almost tricked into becoming one, but he saved himself from them in time.”

“It’s true! Mom told me when he was a young boy he was tracking a moose with some men from the tribe, when he and his friend got separated from them. The moose lead them all through the woods, for many days, until both of them were lost and hungry. The moose tracks had disappeared days before and there wasn’t any game to hunt. They grew so hungry, that one day an evil spirit overcame him. Mom told me he was possessed by the urge to eat his frie…” 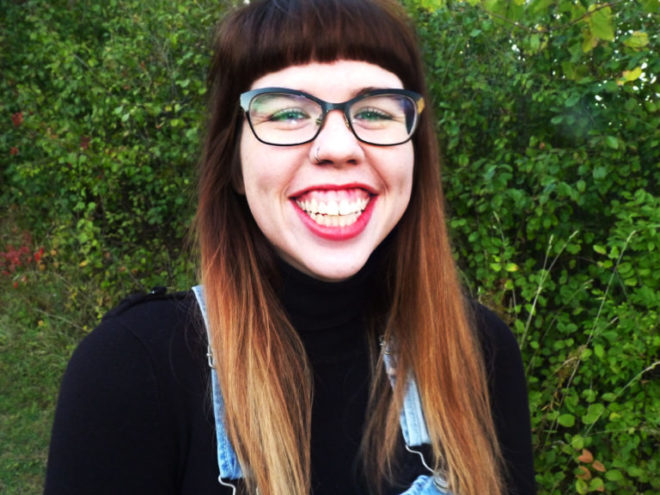 CAITLIN MARCEAU is an author and professional editor living and working in Montreal. She prefers to focus her time on journalism and works of horror, but has also been published for poetry as well as creative nonfiction. When she’s not covered in ink or wading through stacks of paper, you can find her ranting about issues in pop culture or nerding out over a good book. She has a play coming out at the end of the year called SHADOW PUPPETS. Her work can also be found at at Sanitarium Magazine, Shadows at the Door, and Morpheus Tales. Look for her to be featured in “The Women in Horror Annual” issued by the Horror Writers Association. For more information on how to support this project visit: WOMEN IN HORROR ANNUAL and WOMEN IN HORROR ANNUAL. Caitlin blogs here.