“I have to throw on some clothes. I’ll be there in a few minutes.”

It was an unusually protracted farewell for such a casual conversation. He realized that he was holding the phone very tightly in the dark, cradling it against his cheek and ear as if he were holding her hand to his face, feeling her skin cool and warm at the same time. And now there was no further word from her. Connection broken.

He had to fight the impulse to dial her again, instantly, just to reassure himself that the phone still worked – that she was still there. He could imagine her ridicule: he was slowing her down, she was trying to get dressed, he was causing yet another inconvenience on top of so many others.

With the conversation ended, he was forced to return his full attention to his surroundings. He listened, heard again the wind, the distant sound of still water. Still water which made sounds
only when it lapped against something, or when something waded through it. He couldn’t tell one from the other right now. He wished he were still inside the car, with at least that much protection.

She was going to find him. He’d been only a few minutes, probably less than a mile, from home. She would be here any time. 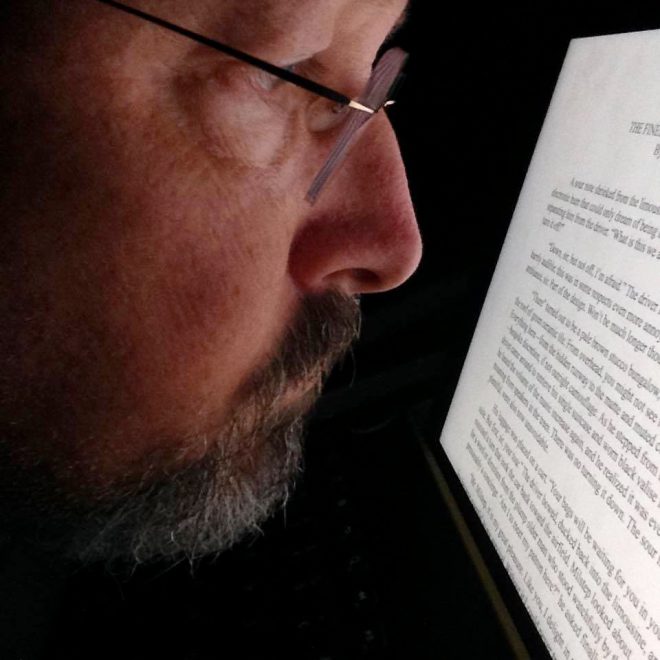 Marc Laidlaw (born 1960) is an American writer of science fiction and horror, and a former scriptwriter with Valve Corporation. He is perhaps most famous for writing Dad’s Nuke and The 37th Mandala, and for working on the popular Half-Life series by Valve.

George Cleveland lives in Tamworth, NH where he cares for cats with Attention Deficit Disorder. He is the Executive Director of the Gibson Center for Senior Services in North Conway. For many years, George was known as The Voice of the Valley on New Hampshire radio, where he conducted over 3500 interviews with newsmakers from all parts of the world – George has spoken with most major Presidential candidates, a representative of an interplanetary confederation and many noted authors and musicians. An avid collector of tales and legends, he sniffs out new hauntings and reports of long lost treasure. He has frequently written on people and places of interest, including musicians and artists and has appeared before numerous historical and school groups in the United States and Hawai’i speaking about his grandfather, former President Grover Cleveland. He was featured on C-SPAN’s ‘American Presidents’ series when they broadcast from Cleveland’s birthplace in Caldwell, New Jersey.